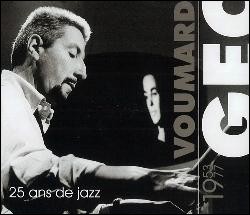 Géo Voumard (2 December 1920 – 3 September 2008) was a Swiss jazz pianist and composer. He was a co-founder of the Montreux Jazz Festival and composer of the song "Refrain" which won the first Eurovision Song Contest.[1]

Voumard was born in Biel/Bienne.[1] He originally studied architecture in college before starting his musical career.[1]

Voumard joined the Hazy Osterwald Orchestra in 1944.[1] Four years later, in 1948, he created his own group. Voumard began broadcasting out of Radio Lausanne, which is now known as Radio Suisse Romande, in 1952.[1] He originally joined Radio Lausanne as an accompanist, pianist, composer and musical producer.[1] In 1966, Voumard became the station's director of pop music. He later served as Radio Lausanne's director of light entertainment from 1969 until 1983.[1]

Voumard moved to the Provence region of France following his departure from radio broadcasting in the 1980s.[1] He worked as an architect in France before returning to his native Switzerland for the remainder of his life.[1]

Géo Voumard died at the age of 87.[1] News of his death was first announced by ATS, A Swiss news agency.[1]

This article uses material from the article Géo Voumard from the free encyclopedia Wikipedia and it is licensed under the GNU Free Documentation License.

Sunday Morning Philipp Fankhauser
Update Required To play the media you will need to either update your browser to a recent version or update your Flash plugin.