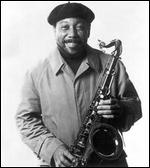 Eli "Lucky" Thompson (June 16, 1924 – July 30, 2005)[1] was an American jazz tenor and soprano saxophonist. While John Coltrane usually receives the most credit for bringing the soprano saxophone out of obsolescence in the early 1960s, Thompson (along with Steve Lacy) embraced the instrument earlier than Coltrane.[2][3]

Thompson was born in Columbia, South Carolina, and moved to Detroit, Michigan, during his childhood.[1][4] Thompson had to raise his siblings after his mother died, and he practiced saxophone fingerings on a broom handle before acquiring his first instrument.[5][6] He joined Erskine Hawkins' band in 1942 upon graduating from high school.[1]

After playing with the swing orchestras of Lionel Hampton,[1] Don Redman, Billy Eckstine (alongside Dizzy Gillespie and Charlie Parker),[1] Lucky Millinder, and Count Basie, he worked in rhythm and blues and then established a career in bebop and hard bop, working with Kenny Clarke, Miles Davis, Gillespie and Milt Jackson.

Ben Ratliff notes that Thompson "connected the swing era to the more cerebral and complex bebop style. His sophisticated, harmonically abstract approach to the tenor saxophone built off that of Don Byas and Coleman Hawkins; he played with beboppers, but resisted Charlie Parker's pervasive influence."[1] He showed these capabilities as sideman on many albums recorded during the mid-1950s, such as Stan Kenton's Cuban Fire!, and those under his own name. He recorded with Parker (on two Los Angeles Dial Records sessions) and on Miles Davis's hard bop Walkin' session.[1][4] Thompson recorded albums as leader for ABC Paramount and Prestige and as a sideman on records for Savoy Records with Jackson as leader.

Thompson was strongly critical of the music business,[1] later describing promoters, music producers and record companies as "parasites" or "vultures".[4] This, in part, led him to move to Paris, where he lived and made several recordings between 1957 and 1962.[1] During this time, he began playing soprano saxophone.[4]

Thompson returned to New York, then lived in Lausanne, Switzerland, from 1968 until 1970,[1] and recorded several albums there including A Lucky Songbook in Europe. He taught at Dartmouth College in 1973 and 1974, then completely left the music business.[1]

In his last years he lived in Seattle, Washington.[1][4] Acquaintances reported that Thompson was homeless by the early 1990s, and lived as a hermit.[1][4]

Thompson was married to Thelma Thompson, who died in 1963.[8] Thompson's son, guitarist Daryl Thompson, played with Peter Tosh and Black Uhuru before embarking on a jazz career in the late 1980s.[9] Thompson also had a daughter, Jade Thompson-Fredericks, and two grandchildren.[1]

This article uses material from the article Lucky Thompson from the free encyclopedia Wikipedia and it is licensed under the GNU Free Documentation License.