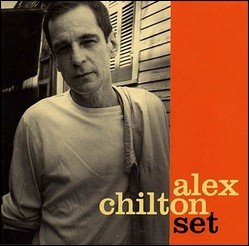 William Alexander "Alex" Chilton (December 28, 1950  March 17, 2010) was an American songwriter, guitarist, singer and producer, best known as the lead singer of The Box Tops and Big Star.[1] Chilton's early commercial success in the 1960s as a teen vocalist for The Box Tops was never repeated in later years with Big Star and in his subsequent indie music solo career on small labels, but he drew an obsessive following among indie and alternative music musicians, and is frequently cited as a seminal influence by influential rock artists and bands.

Chilton grew up in a musical family; his father, Sidney Chilton, was a jazz musician. A local band recruited the teenager in 1966 as their lead singer after learning of the popularity of his vocal performance at a talent show at Memphis' Central High School; this band was the Devilles, later renamed The Box Tops. The new group recorded with Chips Moman and producer/songwriter Dan Penn at American Sound Studio and Muscle Shoals' FAME Studios.

As lead singer for The Box Tops, Chilton enjoyed at the age of 16 a number-one international hit, "The Letter." The Box Tops went on to have several other major chart hits, including "Neon Rainbow" (1967), "Cry Like a Baby" (1968), "Sweet Cream Ladies, Forward March" (1969), and "Soul Deep" (1969). Aside from the hits "The Letter," "Neon Rainbow," and "Soul Deep," all written by Wayne Carson Thompson, many of the group's songs were written by Penn, Moman, Spooner Oldham, and other top area songwriters, with Chilton occasionally contributing a song. By late 1969, only Chilton and guitarist Gary Talley remained from the original group, and newer additions replaced the members who had departed. The group decided to disband and pursue independent careers in February 1970.

Chilton then began performing as a solo artist, maintaining a working relationship with Penn for demos. During this period he began learning guitar by studying the styles of guitarists like Stax Records great Steve Cropper, recording his own material in 1969-70 at Ardent Studios with local musicians like producer Terry Manning (who had worked with Chilton as an engineer on The Box Tops' recordings) and drummer Richard Rosebrough, and producing a few local blues-rock acts. His 1970 recordings and productions from that time frame were released years later in the 1980s and 1990s on albums like Lost Decade (New Rose Records) and 1970 (Ardent Records).

During this era, Chilton was considered as a replacement vocalist for Al Kooper in Blood, Sweat & Tears[2]

After a period in New York City, during which Chilton worked on his guitar technique and singing style (some of which was believed to have been influenced by a chance meeting with Roger McGuinn at a friend's apartment in New York when Chilton was impressed with McGuinn's singing and playing), Chilton returned to Memphis in 1971 and co-founded the power-pop group Big Star, with Chris Bell, recording at engineer John Fry's Ardent Studios. Chilton and Bell co-wrote "In The Street" for Big Star's first album #1 Record, a track later covered by Cheap Trick and used as the theme song of That '70s Show.

The group's recordings met little commercial success but established Chilton's reputation as a rock singer and songwriter; later alternative music bands like R.E.M. and The Posies would praise the group as a major influence. During this period he also occasionally recorded with Rosebrough as a group they called The Dolby Fuckers; some of their studio experimentation was included on Big Star's album Radio City, including the recording of "Mod Lang." Rosebrough would occasionally work with Chilton on later recordings, including Big Star's Third album and Chilton's 1975 solo record Bach's Bottom.

Moving back to New York in 1977, Chilton performed as "Alex Chilton and the Cossacks" with a lineup that included Chris Stamey (later of The dB's) and Richard Lloyd of Television at venues like CBGB, releasing an influential solo single, "Bangkok" (b/w a cover of the Seeds' "Can't Seem to Make You Mine"), in 1978. This period learning from the New York CBGB scene marked the beginning of a key change for Chilton's personal musical interests away from multi-layered pop studio recording standards toward a looser, animated punk performance style often recorded in one take and featuring fewer overdubs. There he made the acquaintance of punk rockabilly band the Cramps. He brought them to Memphis, where he produced the songs that would appear on their Gravest Hits EP and their Songs the Lord Taught Us LP.

In 1979, Chilton released, in a limited edition of 500 copies, the album Like Flies on Sherbert. Produced by Chilton with Jim Dickinson at Phillips Recording and Ardent Studios it features his own interpretations of songs by artists as disparate as the Carter Family, Jimmy C. Newman, Ernest Tubb and KC and the Sunshine Band, along with several originals. While criticized by some as a druggy mess, this album is considered by many to be a lo-fi masterpiece. Sherbert, which included backing work by Memphis musicians including Rosebrough, Memphis drummer Ross Johnson, and Lesa Aldridge, has since been reissued several times. Beginning in 1979 Chilton also co-founded, played guitar with, and produced some albums for Tav Falco's Panther Burns, which began as an offbeat rock-and-roll group deconstructing blues, country, and rockabilly music.

Chilton moved to New Orleans in the early 1980s, while also touring regularly with Panther Burns and occasionally as a solo artist, as documented in his poorly received 1982 solo release Live in London. After a six-month span of working outside music at tree-trimming and dishwashing jobs in New Orleans, he resumed playing with Panther Burns in 1983. His new association with New Orleans jazz musicians (including bassist René Coman) marked a period in which he began playing guitar in a less raucous style and moved toward a cooler, more restrained approach, as heard in Panther Burns's 1984 Sugar Ditch Revisited album, produced by Jim Dickinson.

Immediately upon completing the recording in mid 1984, Chilton returned his focus to his own solo career. He stopped playing regular gigs with Panther Burns and took with him the group's bassist, Coman. Chilton then formed a trio with Coman and Memphis jazz drummer Doug Garrison. The trio immediately began touring intensely and recording at Ardent Studios, releasing in 1985 an EP, Feudalist Tarts, that featured his versions of songs by Carla Thomas, Slim Harpo, and Willie Tee, and releasing in 1986 No Sex. The latter EP contained three originals, including the extended mood piece, "Wild Kingdom," a song highlighting Coman's jazz-oriented, improvisational bass interplay with Chilton.

During this period, in his recordings Chilton began frequently to use a horn section consisting of Memphis veteran jazz performers Fred Ford, Jim Spake, and Nokie Taylor to imbue the soul-oriented pieces among his repertoire with a postmodern, minimalist jazz feel that distinguished his interpretative approach from that of a simple soul revivalist style. Chilton forged a new direction for his solo work, eschewing effects and blending soul, jazz, country, rockabilly, and pop. Coman left Chilton's solo trio at the end of 1986 to pursue other projects, forming (with Garrison) The Iguanas three years later with other New Orleans musicians; both would record occasionally with Chilton after departing.

Chilton was the subject of the song "Alex Chilton" by American rock band The Replacements on their 1987 album Pleased to Meet Me, on which Chilton was a guest musician playing guitar on the song "Can't Hardly Wait."[3]

Chilton included on 1987's High Priest a cover of "Raunchy," his instrumental salute to Sun Records guitarist Sid Manker, a friend of his father from whom he'd once taken a guitar lesson; this song was also a standard in his early Panther Burns repertoire. Along with four upbeat originals, High Priest also included other covers like "Nobody's Fool," a song originally written and recorded in 1973 by his old mentor Dan Penn. His EP Black List contained a cover of Ronny & the Daytonas' "Little GTO," along with an original song, "Guantanamerika." He also produced albums by several artists beginning in the 1980s, including the Detroit group The Gories, occasionally producing Panther Burns albums well into the 1990s.

Touring and recording as a solo artist from the late 1980s through the 1990s with bassist Ron Easley and eventually drummer Richard Dworkin, Chilton gained a reputation for his eclectic taste in cover versions, guitar work, and laconic stage presence. Chilton recorded an acoustic solo record of jazz standards in New Orleans' Chez Flames studio with producer Keith Keller, entitled Cliches, and continued with a live CD released in 2004, Live in Anvers.

From the mid-1990s on, he added to his schedule concerts and recordings with the reunited Box Tops and a version of Big Star. In 1997, Chilton and original Box Tops Danny Smythe, John Evans, Bill Cunningham, and Gary Talley regrouped in Memphis at Easley Studios to record Tear Off, the last Box Tops album, which was only released in Europe. Chilton subsequently toured with the original group annually. Chilton also reformed Big Star, with a lineup that included two members of The Posies, Jon Auer and Ken Stringfellow. A new Big Star album, entitled In Space, with songs penned by this lineup, was released September 27, 2005, on Rykodisc. Chilton was present at his home in New Orleans during Hurricane Katrina and evacuated on September 4, 2005.[4] One of his last studio session was on Cristina Black's The Ditty Session, with Chilton on bass.[5][6][7]

Chilton was taken to the hospital in New Orleans on March 17, 2010, complaining of health problems, and died the same day of a heart attack.[8] Chilton had experienced at least two episodes of shortness of breath in the week prior to his fatal heart attack, though he did not seek medical attention in part because he did not have health insurance.[9] He was survived by his wife, Laura, a son, Timothy, and a sister, Cecilia.[10][11] He had been scheduled to play a concert with Big Star at the South by Southwest music festival in Austin, Texas, on March 20; the show instead took place as a tribute to Chilton, with guests Curt Kirkwood, Chris Stamey, M. Ward, Mike Mills, John Doe, Sondre Lerche, Chuck Prophet, Evan Dando, The Watson Twins, and original member Andy Hummel (who died three months later) joining the other members of Big Star.[12]

This article uses material from the article Alex Chilton from the free encyclopedia Wikipedia and it is licensed under the GNU Free Documentation License.