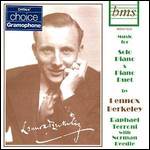 He was born in Oxford, England, and educated at the Dragon School, Gresham's School and Merton College, Oxford. His father was Hastings George Fitzhardinge Berkeley, a captain in the Royal Navy and illegitimate son of George Lennox Rawdon Berkeley, 7th Earl of Berkeley (1827-1888).

In 1927, he went to Paris to study music with Nadia Boulanger, and there he became acquainted with Francis Poulenc, Igor Stravinsky, Darius Milhaud, Arthur Honegger and Albert Roussel. Berkeley also studied with Maurice Ravel, often cited as a key influence in Berkeley's technical development as a composer. The French influence would continue to be felt in his music.

In 1936 he met Benjamin Britten, another old boy of Gresham's School, at the ISCM Festival in Barcelona. He enjoyed a long association with Britten and collaborated on a number of works; these included the suite of Catalan dances titled Mont Juic, and Variations on an Elizabethan Theme (the latter also with four other composers).

He worked for the BBC during the Second World War, where he met his wife.[1]

He wrote several piano works for the pianist Colin Horsley, who commissioned the Horn Trio and some piano pieces, and gave the first performances and/or made the premier recordings of a number of his works, including his third Piano Concerto (1958).[2]

He was Professor of Composition at London's Royal Academy of Music from 1946 to 1968, and his pupils there included Richard Rodney Bennett, David Bedford and John Tavener. 1954 saw the premiere of his first opera Nelson at Sadler's Wells. He was knighted in 1974 and from 197783 was President of the Cheltenham Festival. In later years, his adoption of serialism marked a darker and more brooding style.

His eldest son, Michael Berkeley, Baron Berkeley of Knighton, is also a composer. His youngest son is the photographer Nick Berkeley.

This article uses material from the article Lennox Berkeley from the free encyclopedia Wikipedia and it is licensed under the GNU Free Documentation License.