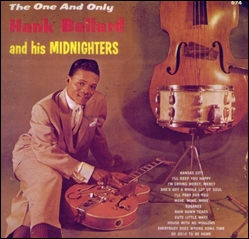 Hank Ballard (born John Henry Kendricks; November 18, 1927 – March 2, 2003)[1] was a rhythm and blues singer and songwriter, the lead vocalist of Hank Ballard and the Midnighters and one of the first rock and roll artists to emerge in the early 1950s. He played an integral part in the development of the genre, releasing the hit singles "Work With Me, Annie" and answer songs "Annie Had a Baby" and "Annie's Aunt Fannie" with his Midnighters. He later wrote and recorded "The Twist" which spread the popularity of the dance and was notably covered by Chubby Checker.[2] He was inducted into the Rock and Roll Hall of Fame in 1990.

Born John Henry Kendricks in Detroit, Michigan, he and his brother, Dove Ballard, grew up and attended school in Bessemer, Alabama, after the death of their father. He lived with his paternal aunt and her husband, and began singing in church. His major vocal inspiration during his formative years was the "Singing Cowboy", Gene Autry, and in particular, his signature song, "Back in the Saddle Again".[3] Ballard returned to Detroit in his teens and later worked on the assembly line for Ford.

Hank Ballard and the Midnighters

In 1953, Ballard joined doo-wop group the Royals, which had previously been discovered by Johnny Otis and signed to Federal Records (a division of King Records), in Cincinnati. Ballard joined Henry Booth, Charles Sutton, Sonny Woods and Alonzo Tucker in the group, replacing previous singer Lawson Smith.

The Royals released "Get It" (1953), an R&B song with possibly sexually oriented lyrics, which some radio stations refused to play,[4] although it still made it to number 6 on the Billboard R&B chart.

The group then changed its name to the Midnighters to avoid confusion with the "5" Royales.[5] In 1954, Ballard wrote a song called "Work with Me, Annie" that was drawn from "Get It".[4] It became the Midnighters' first major R&B hit, spending seven weeks at number 1 on the R&B charts and also selling well in mainstream markets, along with the answer songs "Annie Had a Baby" and "Annie's Aunt Fannie"; all were banned by the FCC from radio air play.[6] Their third major hit was "Sexy Ways", a song that cemented the band's reputation as one of the most risqué groups of the time.[4]

They had four other R&B chart hits in 1954–55, but no others until 1959, by which time the group was billed as "Hank Ballard and The Midnighters" with their label changed from Federal to King, the parent label. Between 1959 and 1961 they had several more both on the R&B and Pop charts, starting with "Teardrops on Your Letter", a number 4 R&B hit in 1960 that had as its B-side the Ballard-written song "The Twist". A few months later, Chubby Checker's cover version of the song went to number 1 on the pop charts. It would return to the top of the charts again in 1962[2] – the only song in the rock and roll era to reach number 1 in two different non-consecutive years.

Ballard and the Midnighters had several other hit singles onto 1962, including the Grammy-nominated "Finger Poppin' Time" (1960) and "Let's Go, Let's Go, Let's Go" (1960) which hit number 7 and number 6, respectively, on the Billboard pop charts. They did not reach the charts again after 1962 and dissolved in 1965.

After the Midnighters disbanded, Ballard launched a solo career. His 1968 single, "How You Gonna Get Respect (When You Haven't Cut Your Process Yet)", was his biggest post-Midnighters hit, peaking at number 15 on the R&B chart. James Brown produced Ballard's 1969 album You Can't Keep a Good Man Down. A 1972 single, "From the Love Side", credited to Hank Ballard and the Midnight Lighters, went to number 43 on the R&B chart. Ballard also appeared on Brown's 1972 album Get on the Good Foot, in a track ("Recitation By Hank Ballard") that features Ballard describing Brown and the album.

During the 1960s, Ballard's cousin, Florence Ballard, was a member of the Detroit girl group the Supremes. In the mid-1980s, Ballard re-formed The Midnighters and the group performed until 2002.

On March 2, 2003, he died at age 75 of throat cancer in his Los Angeles home.[7] He was buried at Greenwood Cemetery in Atlanta, Georgia.

This article uses material from the article Hank Ballard from the free encyclopedia Wikipedia and it is licensed under the GNU Free Documentation License.