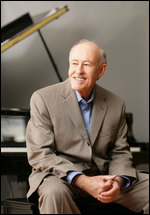 Donald Ernest Friedman (born May 4, 1935 in San Francisco California), better known as Don Friedman, is a jazz pianist. On the West Coast, he performed with Dexter Gordon, Chet Baker, Buddy DeFranco and Ornette Coleman, among others, before moving to New York. There, he led his own trio in addition to playing in Pepper Adams's, Booker Little's and Jimmy Giuffre's bands in the sixties. He was also a part of Clark Terry's big band. He currently works in New York as a pianist and jazz educator.[1] He has many fans in Japan, and has toured the country.[2]

This article uses material from the article Don Friedman from the free encyclopedia Wikipedia and it is licensed under the GNU Free Documentation License.

Three Sounds Blues Jérémy Bruger Trio
Update Required To play the media you will need to either update your browser to a recent version or update your Flash plugin.