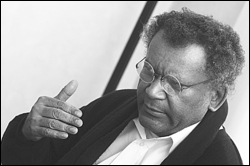 Anthony Braxton (born June 4, 1945) is an American composer, musician, and philosopher.[1] Braxton has released well over 100 albums since the 1960s. Among the array of instruments he plays are the flute; the sopranino, soprano, C-melody, F mezzo-soprano, E-flat alto, baritone, bass, and contrabass saxophones; the E-flat, B-flat, and contrabass clarinets; and the piano.

Braxton studied philosophy at Roosevelt University. He has taught at Mills College and from the 1990s has been Professor of Music at Wesleyan University in Middletown, Connecticut, teaching music composition, music history, and improvisation. In 1994, he was granted a MacArthur Foundation "genius grant". In 2013, he was named a 2014 National Endowment for the Arts Jazz Master.[2]

Early in his career, Braxton led a trio with violinist Leroy Jenkins and trumpeter Wadada Leo Smith and was involved with The Association for the Advancement of Creative Musicians, the "AACM", founded in Chicago, Braxton's birthplace.

In 1968, Braxton recorded the double LP For Alto. There had previously been occasional unaccompanied saxophone recordings (notably Coleman Hawkins' "Picasso"), but For Alto was the first full-length album for unaccompanied saxophone. The album's songs were dedicated to Cecil Taylor and John Cage, among others. The album influenced other artists like Steve Lacy (soprano sax) and George Lewis (trombone), who would go on to record their own solo albums.

Braxton joined pianist Chick Corea's existing trio with Dave Holland (double bass) and Barry Altschul (drums) to form the short-lived avant garde quartet Circle, around 1970. When Corea broke up the group, forming Return to Forever to pursue a fusion-based style of composition and recording, Holland and Altschul remained with Braxton for much of the 1970s as part of a quartet, with the rotating brass chair variously filled by trumpeter Kenny Wheeler, or trombonists George Lewis or Ray Anderson. This group recorded on Arista Records. The core trio plus saxophonist Sam Rivers recorded Holland's Conference of the Birds (ECM). In the 1970s he also recorded duets with Lewis and with synthesizer player Richard Teitelbaum.

In the late 1970s, he recorded two large ensemble recordings, Creative Orchestra Music 1976, inspired by American jazz and marching band traditions, and For Four Orchestras. Both of these records were released on Arista. Braxton's regular group in the 1980s and early 1990s was a quartet with Marilyn Crispell (piano), Mark Dresser (double bass) and Gerry Hemingway (drums), "his finest and longest standing band".[3]

In 1981 he performed at the Woodstock Jazz Festival, held in celebration of the tenth anniversary of the Creative Music Studio. In 1994, he was granted a MacArthur Fellowship. From 1995 to 2006, Braxton's output as a composer concentrated almost exclusively on what he calls Ghost Trance Music, which introduces a steady pulse to his music and also allows the simultaneous performance of any piece by the performers. Many of the earliest Ghost Trance recordings were released on his own Braxton House label (now defunct). His final Ghost Trance compositions were performed with a "12+1tet" at New York's Iridium club in 2006; the complete four-night residency was recorded and released in 2007 by the Firehouse 12 label.

In addition, during the 1990s and early 2000s, Braxton created a prodigiously large body of jazz standard recordings, often featuring him as a pianist rather than saxophonist. He had frequently performed such material in the 1970s and 1980s, but only recorded it occasionally. Now he began to release multidisc sets of such material, climaxing in two quadruple-CD sets for Leo Records recorded on tour in 2003.

More recently he has created new series of compositions, such as the Falling River Musics that are documented on 2+2 Compositions (482 Music, 2005). In 2005, Braxton was a guest performer with the noise group Wolf Eyes at the FIMAV Festival.[4] A recording of the concert, Black Vomit, is described by critic François Couture[5] as sympathetic and effective collaboration: "something really clicked between these artists, and it was all in good fun."

One of his children, Tyondai Braxton, is also a professional musician. He was a guitarist, keyboardist and vocalist with American math rock band Battles.

Beyond his musical career, Braxton is an avid chess player; for a time in the early 1970s he was a professional chess hustler, playing in New York in Washington Square Park.

Braxton's music is difficult to categorize, and because of this, he likes to reference his works (and the works of his collaborators and students) as simply "creative music". He has claimed in numerous interviews that he is not a jazz musician,[6] though many of his works have been jazz and improvisation oriented, and he has released many albums of jazz standards. For example, in an interview Braxton explains, "even though I have been saying I'm not a jazz musician for the last 25 years; in the final analysis, an African-American with a saxophone? Ahh, he's jazz!"[6] In addition to these, Braxton has released an increasing number of works for large-scale orchestras, including two opera cycles.

Braxton's music combines an ecstatic, primal vigor with highly theoretical and mystically influenced systems. He is the author of multiple volumes explaining his theories and pieces, such as the philosophical three-volume Triaxium Writings and the five-volume Composition Notes, both published by Frog Peak Music. While his compositions and improvisations can be characterized as avant-garde, many of his pieces have a swing feel and rhythmic angularity that are overtly indebted to Charlie Parker and the bebop tradition.

Though much of his music can be safely classified as jazz, Braxton has worked in a wide variety of other genres and has sometimes had a prickly relationship with the jazz mainstream. Critic Chris Kelsey writes:

Braxton is notorious for naming his pieces as diagrams, typically labeled with cryptic numbers and letters. Sometimes these diagrams have an obvious relation to the music for instance, on the album For Trio the diagram-title indicates the physical positions of the performers, but in many cases the diagram-titles remain inscrutable. The titles can themselves be musical notation indicating to the performer how a piece is played. Sometimes the letters are identifiable as the initials of Braxton's friends and musical colleagues.

Braxton has pointedly refused to explain their significance, claiming that he himself is still discovering their meaning. Braxton eventually settled on a system of opus-numbers to make referring to these pieces simpler, and earlier pieces have had opus-numbers retroactively added to them.

By the mid-to-late 1980s, Braxton's titles had become increasingly complex. They began to incorporate drawings and illustrations, such as in the title of his four-act opera cycle, Trillium R. Others began to include lifelike images of inanimate objects, namely train cars. The latter was most notably seen after the advent of his Ghost Trance Music system.

In the twenty-first century, he still actively performs with ensembles of varying sizes, and has to date written well over 350 compositions. He has just recently finished the last batch of Ghost Trance Music compositions, and has now shown his interest in three other music systems: The Diamond Curtain Wall Trio, in which Braxton implements the aid of the computer audio programming language SuperCollider;[7] Falling River Musics; and, most recently, Echo Echo Mirror House music, which is meant to hone in many different types of performance arts in addition to music. In addition to their own instruments, musicians playing Echo Echo Mirror House compositions incorporate amplified mp3 players loaded with Braxton's discography to create a unique sound-space.

This article uses material from the article Anthony Braxton from the free encyclopedia Wikipedia and it is licensed under the GNU Free Documentation License.