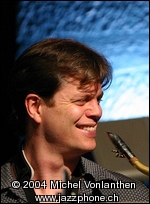 Donald Paul "Donny" McCaslin (born August 11, 1966) is an American jazz saxophonist. He has recorded over a dozen albums as a bandleader in addition to many sideman appearances, and came to wider prominence when English rock singer David Bowie hired McCaslin's ensemble as his backing band for Blackstar (2016), his final studio album.

McCaslin was born in Santa Clara, California. His father was a vibraphonist, and he played in his father's ensemble at the age of twelve. He had his own group in Aptos High School which played three years at the Monterey Jazz Festival.[1] He studied under Paul Contos and Brad Hecht in the San Francisco region, both of whom played in his father's group. He played in a number of youth ensembles, including under the band director and music educator Don Keller, and toured Europe and Japan with them; he was offered a full scholarship to the Berklee College of Music, where he enrolled in 1984. While there he was influenced by Gary Burton, Herb Pomeroy, Billy Pierce, George Garzone, and Joe Viola. McCaslin performed regularly in Boston and Cambridge with The True Colors Big Band, run by composer Ken Schaphorst.

In 1987 McCaslin joined Burton's group and toured the world with him for four years. In 1991 he moved to New York City and was a member of Steps Ahead[1] until 1994, replacing Michael Brecker. He also played with the Gil Evans Orchestra, the George Gruntz Concert Jazz Band, Danilo Perez, Maria Schneider, and Santi DeBriano. In 1996 he played on Ken Schaphorst's Uprising, alongside John Medeski, Doug Yates, and Uri Caine. The following year he played with David Binney, Scott Colley, and Kenny Wolleson on the collaboration Lan Xang. In 2006 he joined the Dave Douglas Quintet. In 2010 he recorded as a featured soloist on the CD Coming Through Slaughter: The Bolden Legend.

In November 2014, McCaslin played tenor and soprano saxophone on David Bowie's single "Sue (Or in a Season of Crime)". Subsequently he would play saxophone on Bowie's 2016 album Blackstar.[2]

On October 14, 2016, McCaslin released Beyond Now, inspired by his experience recording Blackstar with David Bowie. The album features the same band that appeared on Blackstar - Tim Lefebvre on bass, Jason Lindner on keyboards, and Mark Guiliana on drums. The album includes two David Bowie covers, as well as covers of MUTEMATH, Deadmau5, and The Chainsmokers, plus five original tracks.[3]

With The Maria Schneider Jazz Orchestra

This article uses material from the article Donny McCaslin from the free encyclopedia Wikipedia and it is licensed under the GNU Free Documentation License.

Saratoga Swing Bowler Hats
Update Required To play the media you will need to either update your browser to a recent version or update your Flash plugin.