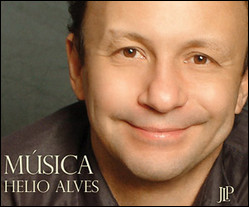 Helio Alves (born São Paulo, 1966) is a jazz pianist and son of pianists. He is equally at home in both Brazilian and Jazz idioms, and a highly sought after virtuoso.
He moved to Boston, Massachusetts at 18 and studied at the Berklee College of Music. He stayed in Boston until age 24 when he moved to New York City on advice from a friend. He now lives in New York city with his wife and two daughters.

In 2003 he was pianist on a Grammy winning albums of Yo Yo Ma "Obrigado Brasil", Joe Henderson "Big Band" and Paquito D'Rivera "Brazilian Dreams".[1]
He is featured soloist on "Then Again" as a member of the Paul Peress Trio, release in 2006.[2] Alves was a member of Santi Debriano's ensemble, Circlechant. Rosa Passos, Paquito D'Rivera, Duduka Da Fonseca, Joyce, Paul Peress Project, Airto Moreira, Maucha Adnet[3]

This article uses material from the article Helio Alves from the free encyclopedia Wikipedia and it is licensed under the GNU Free Documentation License.

Birthplace Blues Apero Jazz Quintett
Update Required To play the media you will need to either update your browser to a recent version or update your Flash plugin.