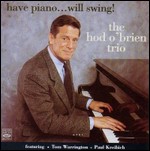 O'Brien studied at the Oberlin Conservatory and then at the Manhattan School of Music (195457). He began playing professionally in 1950, and substituted for Randy Weston in 1955. He led his own group in Lenox, Massachusetts during 1956-57, then joined Oscar Pettiford in 1957-58, and J.R. Monterose/Elvin Jones in 1958-59. Between 1960 and 1963 he played with Phil Woods, Freddie Hubbard, Charlie Rouse, and Lee Konitz. In 1964 he enrolled at Columbia University, where he studied mathematics and psychology, achieving his bachelor's in 1969; he then took a position in computer programming at New York University during 1969-74, and studied computer music under Hall Overton and Charles Wuorinen.

O'Brien ran the St. James Infirmary jazz club in New York City in 1974-75 and played in the house band alongside Beaver Harris and Cameron Brown; this group accompanied Roswell Rudd, Sheila Jordan, Chet Baker, Zoot Sims, Al Cohn, Pepper Adams, and Archie Shepp, among others. He played with Marshall Brown (1975), Russell Procope and Sonny Greer (1977), Joe Puma (197782, at Gregory's in New York City), and Stephanie Nakasian (1982). He later married Nakasian. He taught at Turtle Bay Music School in 1972-75, and in the 1990s at the University of Virginia.

This article uses material from the article Hod O'Brien from the free encyclopedia Wikipedia and it is licensed under the GNU Free Documentation License.

It'll Make A Hole In You Ray Bonneville
Update Required To play the media you will need to either update your browser to a recent version or update your Flash plugin.