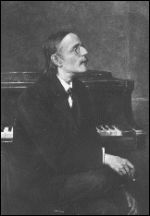 Cornelius played violin and composed lieder from an early age, studying with Tekla Griebel-Wandall and composition with Heinrich Esser in 1841. Cornelius lived with his painter uncle Peter von Cornelius in Berlin from 1844 to 1852,[1] during which time he met prominent figures such as Alexander von Humboldt, the Brothers Grimm, Friedrich Rückert and Felix Mendelssohn.

Cornelius's first mature works (including the opera Der Barbier von Bagdad) were composed during his brief stay in Weimar (1852–1858). His next place of residence was Vienna, where he stayed for five years. It was in Vienna that Cornelius began a friendship with Richard Wagner. It was at Wagner's behest that Cornelius moved to Munich in 1864, where he finally took a wife and fathered four children.[1]

Among many British musicians, his best-known work is The Three Kings, an Epiphany anthem for solo voice and chorus in which the soloist sings "Three Kings from Persian lands afar ..." to an entirely new tune by Cornelius over the choir, which performs the chorale tune of Philipp Nicolai, Wie schön leuchtet der Morgenstern ("How brightly shines the morning star") underneath. A version of "The Three Kings" is included in the first volume of the popular Willcocks and Jacques compilation Carols for Choirs.

During his last few years in Berlin, Cornelius wrote music criticism for several major Berlin journals and entered into friendships with Joseph von Eichendorff, Paul Heyse and Hans von Bülow. Despite his friendships with Wagner and Franz Liszt, Cornelius had a rocky relationship with the so-called "New German School" of composition.

His third and final operatic project, Gunlöd, based on the Norse eddas, was left incomplete at his death (from diabetes).

He died in Mainz where his grave in the Hauptfriedhof survives.

This article uses material from the article Peter Cornelius from the free encyclopedia Wikipedia and it is licensed under the GNU Free Documentation License.