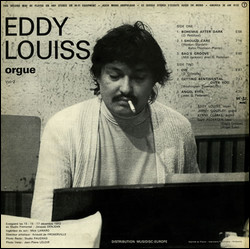 Eddy started playing in his father Pierre's orchestra in the 1950s. Pierre changed the family name from Louise to Louiss. As a vocalist, he was a member of Les Double Six of Paris from 1961 through 1963.[3] During this time his primary instrument became the Hammond organ.

For 13 years, between 1964 and 1977, he played with leading French musician Claude Nougaro. After that, he made the decision, one that his son Pierre described as "not that easy", to split from Nougaro to head out on a solo career.[1]

He worked with Kenny Clarke, René Thomas, and Jean-Luc Ponty.[5] In 1971 he was a member of the Stan Getz quartet (with René Thomas and Bernard Lubat)[6] that recorded the Getz album Dynasty (1971).[2]

Eddy Louiss had his left leg amputated in the early 1990s after suffering artery problems, following which he made few public appearances.

In duet, he recorded with pianist Michel Petrucciani (1994)[7] and accordionist Richard Galliano (2002). His later recordings, such as Sentimental Feeling and Récit proche, combined jazz with rock and world music.

This article uses material from the article Eddy Louiss from the free encyclopedia Wikipedia and it is licensed under the GNU Free Documentation License.