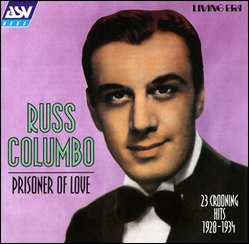 Ruggiero Eugenio di Rodolpho Colombo (January 14, 1908 – September 2, 1934), known as Russ Columbo, was an American singer, violinist and actor, most famous for his signature tune "You Call It Madness, But I Call It Love", his compositions "Prisoner of Love" and "Too Beautiful For Words", and the legend surrounding his early death.

Columbo was born in Camden, New Jersey, the twelfth child of Italian immigrant parents, Nicola and Giulia (Julia) Colombo. He started playing the violin at a very young age and debuted professionally at the age of 13. He left high school at age 17 to travel with various bands around the country. He sang and played violin in numerous nightclubs.

By 1928, at the age of 20, Columbo began to participate in motion pictures, including a Vitaphone short in which Columbo appeared as a member of Gus Arnheim and His Orchestra. Eventually, he did obtain some feature work in front of the camera, but he slowed down his activities in cinema to pursue other interests. At the time of his death, Columbo had just completed work on the film Wake Up and Dream; he was on his way to stardom when his life was cut short.[1] Some of Columbo's other films are: Woman to Woman (with Betty Compton), Wolf Song (with Lupe Vélez), The Texan (with Gary Cooper), and Broadway Thru a Keyhole.[2][3]

Columbo performed seven vocals while with Arnheim as a member of the string section, six for Okeh Records and only one for Victor ("A Peach Of Pair" on June 18, 1930, a few months before Bing Crosby joined the band, along with Al Rinker and Harry Barris as "The Rhythm Boys").

Columbo ran a nightclub for a while, The Club Pyramid, but gave it up when his manager told him he had star potential.[2] In 1931, he traveled to New York with his manager, songwriter Con Conrad. Conrad secured a late-night radio slot with NBC. This led to numerous engagements, a recording contract with RCA Victor records, and tremendous popularity with legions of mostly female fans. Not long after arriving in New York, Columbo met actress Dorothy Dell at an audition for the Ziegfeld Follies and began seeing her. Conrad did his best to break the relationship up with a series of publicity-created "ruse romances" involving Columbo and actresses such as Greta Garbo and Pola Negri; it succeeded.[4] (Dorothy Dell died in an auto accident in June 1934just months before Columbo's own fatal accident.) The type of singing that was popularized by the likes of Columbo, Rudy Vallee, and Bing Crosby is called crooning. Columbo disliked the label, but it caught on with the general public. It gained popular credence, despite its initial use as a term of derision for the singers employing their low, soothing voices in romantic songs.

Columbo composed the songs "Prisoner of Love", "You Call It Madness (But I Call It Love)" with Con Conrad, Gladys Du Bois, and Paul Gregory, "Too Beautiful For Words", recorded by the Teddy Joyce Orchestra in 1935, "When You're in Love", "My Love", "Let's Pretend There's a Moon", recorded by Fats Waller and Tab Hunter, and "Hello Sister". "Prisoner of Love" is a standard that has been recorded by Frank Sinatra, Jo Stafford, Art Tatum, Perry Como, the Ink Spots, Mildred Bailey, Teddy Wilson with Lena Horne on vocals, Bing Crosby, Billy Eckstine, and James Brown. Perry Como had a no.1 hit on Billboard with his recording. James Brown had a Top 20 pop hit and performed the song on The Ed Sullivan Show and in the concert movie The T.A.M.I. Show (1964).

On September 2, 1934, Columbo was shot under peculiar circumstances by his longtime friend, photographer Lansing Brown, while Columbo was visiting him at home. Brown had a collection of firearms and the two men were examining various pieces. Quoting Brown's description of the accident:[5]

I was absent-mindedly fooling around with one of the guns. It was of a dueling design and works with a cap and trigger. I was pulling back the trigger and clicking it time after time. I had a match in my hand and when I clicked, apparently the match caught in between the hammer and the firing pin. There was an explosion. Russ slid to the side of his chair.

The ball ricocheted off a nearby table and hit Columbo above the left eye. Surgeons at Good Samaritan Hospital made an unsuccessful attempt to remove the ball from Columbo's brain; he died less than six hours after the shooting.[1][6] Columbo's death was ruled an accident, and Brown exonerated from blame.[7][8] His funeral mass was attended by numerous Hollywood luminaries, including Bing Crosby and Carole Lombard, who was to have had dinner with Columbo the evening of the accident and who was romantically involved with him.[1][4][9][10]

Columbo's mother was hospitalized in serious condition from a heart attack at the time of the accident; the news was withheld from her by his brothers and sisters for the remaining ten years of her life.[1][11] Due to her previous heart condition, it was feared that the news would prove fatal to her (she died in 1944). They used all manner of subterfuges to give the impression that Colombo was still alive, including faked letters from him and records used to simulate his radio program.[12]

Actress Virginia Brissac was serving as Columbo's private secretary at the time of his death, and was later called upon by the Los Angeles County Coroner's Office to testify and identify Columbos remains at the subsequent inquest.[13]

In 1958, singer Jerry Vale recorded a tribute album, I Remember Russ. In 1995, 61 years after Columbo's death, singer Tiny Tim released an album in tribute to Columbo, titled Prisoner of Love (A Tribute to Russ Columbo), which he recorded with the group Clang.

Columbo is one of the historical figures named in the Neil Diamond composition "Done Too Soon".

This article uses material from the article Russ Columbo from the free encyclopedia Wikipedia and it is licensed under the GNU Free Documentation License.