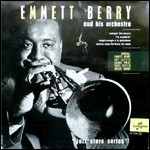 Berry was born in Macon, Georgia. He began with study of classical trumpet in Georgia, but by 18 had switched to jazz and moved to New York City. He became a member of Fletcher Henderson's band and later replaced Roy Eldridge as soloist. In the 1940s he would work in Eldridge's Little Jazz Trumpet Ensemble. He also played in Count Basie's band. He is noted as an accompaniment for Billie Holiday, was in the picture A Great Day in Harlem, and the special The Sound of Jazz. He died in Cleveland, Ohio.

This article uses material from the article Emmett Berry from the free encyclopedia Wikipedia and it is licensed under the GNU Free Documentation License.

Overflowing Cup Lorenz Schaller
Update Required To play the media you will need to either update your browser to a recent version or update your Flash plugin.