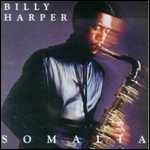 Billy Harper (born January 17, 1943 in Houston, Texas) is an American jazz saxophonist, "one of a generation of Coltrane-influenced tenor saxophonists" with a distinctively stern, hard-as-nails sound on his instrument.[1]

In 1965 Harper earned a Bachelor of Music degree from the University of North Texas.[2]

Harper has played with some of jazz's greatest drummers; he served with Art Blakey's Messengers for two years (196870); he played very briefly with Elvin Jones (1970), he played with the Thad Jones/ Mel Lewis Orchestra in the 1970s, and was a member of Max Roach's band in the late 1970s.[3] He has also been a frequent member of Randy Weston's ensembles. He performed on Gil Evans' 1973 album Svengali, and contributed two of the most-performed tunes in the band's repertoire: "Priestess" and "Thoroughbred".

Harper's 1973 album Capra Black "remains one of the seminal recordings of jazz's black consciousness movement--a profoundly spiritual effort that channels both the intellectual complexity of the avant garde as well as the emotional potency of gospel".[4] The Italian jazz label Black Saint was launched with Harper's 1975 album Black Saint. His later releases have mostly been on SteepleChase and Evidence.

This article uses material from the article Billy Harper from the free encyclopedia Wikipedia and it is licensed under the GNU Free Documentation License.

My One And Only Love Nolan Quinn
Update Required To play the media you will need to either update your browser to a recent version or update your Flash plugin.