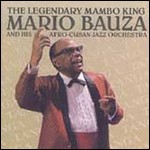 Mario Bauzá (28 April 1911 – 11 July 1993) was an important Cuban musician. He was one of the first to introduce Latin music to the United States by bringing Cuban musical styles into the New York jazz scene. He was one of the most influential figures in the development of Afro-Cuban music, and his innovative work and musical contributions have many jazz historians to call him the "founding father of Latin jazz". If so, it is an exaggeration, since Cuban jazz was established much earlier.[1][2]

Trained as a classical musician, he was a clarinetist in the Havana Philharmonic Orchestra by the age of nine, where he would stay for three years. Bauzá traveled to New York in 1925 to record with Maestro Antonio María Romeu's band, a charanga, shortly after his fourteenth birthday. Bauzá returned to Cuba but moved back to New York in 1930 and reputedly learned to play trumpet in just over two weeks in order to earn a spot in Don Azpiazú's Orchestra. This was in need of a trumpeter to play on recordings for RCA Victor.

Bauzá had been hired as lead trumpeter and musical director for Chick Webb's Orchestra by 1933, and it was during his time with Webb that Bauzá both met fellow trumpeter Dizzie Gillespie and discovered and brought into the band singer Ella Fitzgerald.

In 1938 Bauzá joined Cab Calloway's band, later convincing Calloway to hire Dizzie Gillespie as well. Bauza continued to work with Gillespie for several years after he left Calloway's band in 1940. The fusion of Bauzá's Cuban musical heritage and Gillespie's bebop culminated in the development of cubop, one of the first forms of Latin jazz.

In 1941, Bauzá became musical director of Machito and his Afro-Cubans, a band led by his brother-in-law, Machito. The band produced its first recording for Decca in 1941, and in 1942 Bauzá brought in a young timbales player named Tito Puente.[3]

The band had a major hit with Tanga, written by Bauzá in the cubop style. There were other good recordings in similar style, Cubop City and Mambo Inn, but the quality of Tanga proved hard to repeat. Machito's Afro-Cubans, for the most part, played straight, authentic Cuban music. Many of the numbers were covers of recordings which had proved popular in Cuba. The band played mambo-style dance numbers at venues such as Manhattan's Palladium Ballroom. Bauzá kept his post as director of the Afro-Cubans until 1976. After this he worked sparingly, but was always highly respected. He recorded a few Cuban jazz albums which had limited sales. His last band made a guest appearance on a 1992 episode of The Cosby Show.

This article uses material from the article Mario Bauza from the free encyclopedia Wikipedia and it is licensed under the GNU Free Documentation License.