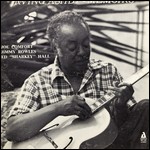 He then briefly replaced Charlie Smith, a drummer, in the Oscar Peterson Trio, producing a lineup (piano, guitar, bass) similar to the Cole Trio's; the substitution of a guitarist for a drummer continued until 1958. After leaving the Peterson Trio, Ashby concentrated on session work, which included recording with Norman Granz, Sheb Wooley, LaVern Baker, Howard Roberts, B.B. King, Louis Jordan, and Pat Boone. In addition to guitar, Ashby played the upright bass. Ashby died in April 1987 in Perris, California, at the age of 66.