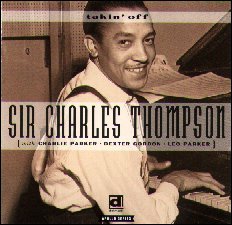 He was a professional pianist from the age of 10. By the age of twelve Thompson was playing private parties with Bennie Moten and his band in Colorado Springs. During this time Count Basie played off and on with Moten's band, and during a showing Basie called the young Thompson up to play. He was dubbed Sir Charles Thompson by Lester Young years later.

Thompson composed the jazz standard "Robbins' Nest".[1] He has chiefly worked with small groups, although he belonged to the Coleman Hawkins/Howard McGhee band in 1944-1945.[1] Throughout the 40s he recorded with Charlie Parker, Dexter Gordon and J.C. Heard, among others.

This article uses material from the article Charles Thompson (jazz) from the free encyclopedia Wikipedia and it is licensed under the GNU Free Documentation License.

10 Ans Murat Öztürk
Update Required To play the media you will need to either update your browser to a recent version or update your Flash plugin.