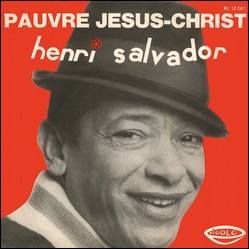 Salvador was born in Cayenne, French Guiana. His father, Clovis, and his mother, Antonine Paterne, daughter of a native Carib Indian, were both from Guadeloupe, French West Indies. Salvador had a brother, André, and a sister, Alice.

He began his musical career as a guitarist accompanying other singers. He had learned the guitar by imitating Django Reinhardt's recordings, and was to work alongside him in the 1940s. Salvador recorded several songs written by Boris Vian with Quincy Jones as arranger. He played many years with Ray Ventura and His Collegians where he used to sing, dance and even play comedy on stage.

He is known to have recorded the first French rock and roll songs in 1957 written by Boris Vian and Michel Legrand — "Rock'n Roll Mops", "Rock hoquet, Va t'faire cuire un oeuf, man" and "Dis-moi qu'tu m'aimes rock" — under the artist name of Henry Cording (a play on the word "Recording"). Despite this historical aspect, he never ceased to claim that he disliked rock and roll and even refused to talk about this subject later on.

In the 1960s, Salvador was the host of several popular television variety shows on French TV. In 1964, he scored a hit with "Zorro est arrivé", which was inspired by The Coasters' U.S. hit "Along Came Jones". He is also famous for his rich, catchy laugh, which is a theme in many of his humorous songs. In 1969, Henri Salvador recorded a variation of "Mah Nà Mah Nà" entitled "Mais non, mais non" ("But No, But No" or "Of Course Not, Of Course Not"), with lyrics he had written in French to Piero Umiliani's music.

Henri Salvador and his song "Dans mon île" (1957) were thought to be an influence on Antônio Carlos Jobim in formulating the Brazilian bossa nova style.[1]

At the age of 70, Salvador was the voice-over of the crab Sebastian in the 1989 French dubbing of Disney's The Little Mermaid. Recordings of "Embrasse-la" ("Kiss the Girl") can be found on YouTube.

He died of a ruptured aneurysm at his home in the early hours of 13 February 2008. He was 90 years of age. He was buried next to his wife Jacqueline in Père-Lachaise Cemetery.

He was known as a supporter of Paris Saint-Germain F.C. He obtained four seats for life in the Parc des Princes.

Henri Salvador continues to be popular today among French communities in Canada. In 2000, Virgin Records released a CD featuring popular hits such as "Jazz Mediterrannée", which continues to receive regular air play. In 2002, his album Chambre avec vue sold over two million copies. In 2005, Salvador was awarded the Brazilian Order of Cultural Merit, which he received from the acclaimed singer and Minister of Culture, Gilberto Gil, in the presence of President Luiz Inácio Lula da Silva for his influence on Brazilian culture, particularly on bossa nova, to whose invention he contributed. That same year he took 52nd place in the election of Le Plus Grand Français (The Greatest Frenchman).

He was also a commander of the French Légion d'honneur and of the French National Order of Merit. In 2007, he released Révérence on V2 Records, featuring Gilberto Gil and Caetano Veloso. He then went on to perform the track "La vie c'est la vie" from that album on an episode of the BBC programme Later… with Jools Holland aired on 4 May 2007.

This article uses material from the article Henri Salvador from the free encyclopedia Wikipedia and it is licensed under the GNU Free Documentation License.

Solitude John Ward Trio
Update Required To play the media you will need to either update your browser to a recent version or update your Flash plugin.