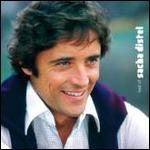 Alexandre Sacha Distel (29 January 1933 – 22 July 2004) was a French singer and guitarist who had hits with a cover version of the Academy Award-winning "Raindrops Keep Falling on My Head"[1] (originally recorded by B. J. Thomas), "Scoubidou", and "The Good Life". He was made Chevalier (Knight) of the Légion d'honneur in 1997.[2]

Sacha Distel, born Alexandre Distel, was the son of Russian White émigré Leonid Distel, born in 1894,Odessa (Ukraine, then in Russian Empire) and French-Jewish pianist Andrée Ventura.[3] Sacha's uncle, Ray Ventura, was a jazz promoter. In the 1930s Ventura promoted and participated in the development of swing in France. When his uncle settled in Paris with his orchestra, "Les Collégiens", Distel gave up his piano for the guitar.[4]

In 1948, Ventura invited Distel to listen to Dizzy Gillespie perform with his orchestra, along with Bruno Coquatrix, Paul Misraki and André Hornez. Distel's efforts led to the orchestra's split, which gave birth to two rival bands: Guy Wormser's New Orleans die-hards and the cool jazz and bebop aficionados led by Distel. After meeting Hubert Damisch, a saxophone player, Sacha founded the band that would allow him to be up with the leaders. With help from Jean Marie Ingrand (bass), Mimi Perrin (piano) and Jean-Louis Viale (drums), the band won the Coliseum's Night of Jazz "Meilleur Petit Orchestre Moderne" award, with Damisch and Distel winning prizes as musicians on the same night. Distel became a professional jazz guitarist. Over his career he worked alongside Dizzy Gillespie and Tony Bennett and appeared on The Ed Sullivan Show in the late 1950s after establishing himself as a French crooner.

He rose to fame in 1958 with the song "Brigitte", a homage to Brigitte Bardot, with a photo of the couple on the cover.

In the 1960s, he composed "La Belle Vie", a tune that made its way across the Atlantic as "The Good Life", most famously performed by Tony Bennett. French lyrics were added in the 1970s and it became Distel's signature tune. During the 1960s, he had his own variety show on French television.

He is mentioned in the lyrics of the song "Where Do You Go To My Lovely" by Peter Sarstedt, in the eighth line "Where you keep your Rolling Stones records/ And a friend of Sacha Distel, yes you do."

In the 1970s, he became popular outside France, and hosted the Miss World contest in London in 1977. During this decade, he spent more time in the UK than in France. His only British hit single came in 1970 with a cover of "Raindrops Keep Falling on My Head", the Oscar-winning Burt Bacharach/Hal David song from the Western Butch Cassidy and the Sundance Kid; Distel's version reached No.10 in the UK. (The original recording by B. J. Thomas, a million-seller in the US, had been only a minor British chart entry.)

Sacha Distel was invited to Iran for the Shah's birthday in 1976 and performed for a private members-only audience at a private club and casino, Varian Hotel, in the mountains of Iran near the Karaj Dam.

Distel appeared on numerous TV variety shows in the UK throughout the 1970s and 1980s, including Seaside Special and The Val Doonican Show. Maintaining his popularity in his homeland, however, Distel recorded French versions of various English-language million-sellers. These included "Vite, Cherie, Vite" ("Beach Baby"), "Chanson Bleue" ("Song Sung Blue") and "Je T'Appelle Pour Dire Que Je T'Aime" ("I Just Called To Say I Love You"). He also recorded in German, Spanish and Italian to satisfy his audiences in other parts of Europe.

He was the subject of This Is Your Life in December 1971 when he was surprised by Eamonn Andrews at London's Talk of the Town.

In August 1980, in honour of Queen Elizabeth The Queen Mother, Distel performed at Buckingham Palace to mark her 80th birthday. The Queen Mother was said to have been impressed by Distel's moving voice and later in the night she requested "You Must Have Been a Beautiful Baby", a song that had been recorded by Perry Como, one of her favourite singers. Maurice Chevalier had previously sung the song directly to the Queen Mother during the 1961 Royal Variety Performance.

Distel remained popular in France in the 1980s and 1990s, with a new show named after his song La Belle Vie. In 2000, Distel had a part as lawyer Billy Flynn in the London production of Chicago. In 2001 Distel had a cameo appearance in an episode of comedy Absolutely Fabulous that was filmed in Paris.

Distel was involved with actress Brigitte Bardot in 1958, having invited her to his birthday party in St Tropez. The relationship ended in 1959, it being reported that Distel had allegedly refused Bardot's proposal of marriage. Distel reported that she had ended the affair in a press release in 1959. He was also romantically involved with singer Dionne Warwick. He married championship Olympic skier Francine Bréaud in 1963. Distel publicly stated that he remained faithful to his wife, saying "Anything I want in a woman I can get at home." They had two sons.[5]

Sacha Distel died on 22 July 2004, aged 71, after a long illness, in Rayol-Canadel, southeast France. Just two weeks before his death, he could be seen on TV participating in a charity broadcast of Qui veut gagner des millions ?

This article uses material from the article Sacha Distel from the free encyclopedia Wikipedia and it is licensed under the GNU Free Documentation License.