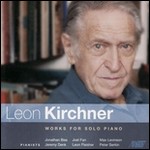 Kirchner was born in Brooklyn, New York. He began his music studies at the age of four. Five years later, his family moved to Los Angeles. He began composing while a student at Los Angeles City College. With the encouragement of his piano teachers and Ernst Toch, he entered the University of California, Los Angeles to study with Arnold Schoenberg. Kirchner began graduate studies at the University of California, Berkeley and was awarded the George Ladd Prix de Paris in 1942. As World War II put Europe in turmoil, he went to New York and studied with Roger Sessions. At the war's end, he returned to Berkeley as a lecturer and assisted Sessions and Ernst Bloch in theory.

Kirchner's musical style is generally linear, chromatic, rhapsodic and rhythmically irregular; it is influenced by Schoenberg but does not employ the twelve-tone technique. Many of his early works are sectional, with strongly contrasting textures and tempos. In his later works, the textures and tempos tend to be more continuous and changes more gradual. By and large, Kirchner favored compact structures based on a minimal number of motifs. According to Alexander Ringer, he remained consistently individual, unimpressed by changing fashion where "idea, the precious ore of art, is lost in the jungle of graphs, prepared tapes, feedbacks and cold stylistic minutiae". [3]

Kirchner married Gertrude Schoenberg, a singer, on July 8, 1949; they had one son and one daughter.[4] He died of congestive heart failure at his home on Central Park West in New York City. He was 90.

This article uses material from the article Leon Kirchner from the free encyclopedia Wikipedia and it is licensed under the GNU Free Documentation License.

A Kiss To Build A Dream On Charlie Byrd & Joe Wilder
Update Required To play the media you will need to either update your browser to a recent version or update your Flash plugin.