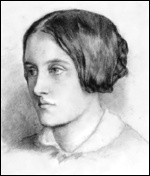 Christina Georgina Rossetti (5 December 1830 – 29 December 1894) was a British poet, who wrote a variety of romantic, devotional, and children's poems. She is best known for her long poem Goblin Market, her love poem "Remember", and for the words of what became the popular Christmas carol "In the Bleak Midwinter".

Rossetti was born in London and educated at home by her mother. Her siblings were the artist and poet Dante Gabriel Rossetti, William Michael Rossetti, and Maria Francesca Rossetti. Their father, Gabriele Rossetti, was an Italian poet and a political asylum seeker from Naples; their mother, Frances Polidori, was the sister of Lord Byron's friend and physician, John William Polidori, author of The Vampyre. In the 1840s her family was stricken with severe financial difficulties due to the deterioration of her father's physical and mental health. When she was 14, Rossetti suffered a nervous breakdown and left school.

Her breakdown was followed by bouts of depression and related illness. During this period she, her mother, and her sister became seriously interested in the Anglo-Catholic movement that was part of the Church of England. This religious devotion played a major role in Rossetti's personal life. In her late teens she became engaged to the painter James Collinson, who was, like her brothers Dante and William, one of the founding members of the avant-garde artistic group, the Pre-Raphaelite Brotherhood, but this ended because he reverted to Catholicism. Later she became involved with the linguist Charles Cayley but did not marry him, also for religious reasons. She was a volunteer worker from 1859 to 1870 at the St Mary Magdalene "house of charity" in Highgate, a refuge for former prostitutes.

Christina modelled for several of her brother Dante's most famous works. In 1848 she was the model for the Virgin Mary in his first completed oil painting, The Girlhood of Mary Virgin, which was also the first to be inscribed with the initials "PRB", later to be revealed as standing for "Pre-Raphaelite Brotherhood".[1] The following year she repeated that role in his depiction of the Annuciation, Ecce Ancilla Domini.

Rossetti began writing at age 7 but she was 18 when her first published poem appeared in the Athenaeum magazine. Between January and April 1850, the Pre-Raphaelite group published a literary magazine, The Germ, edited by her brother William, to which she contributed. However her most famous collection, Goblin Market and Other Poems, appeared in 1862, when she was 31. The collection garnered much critical praise and, according to Jan Marsh, "Elizabeth Barrett Browning's death" (in 1861) "led to Rossetti being hailed as her natural successor as 'female laureate'." The title poem from this book is one of Rossetti's best known works and, although at first glance it may seem merely to be a nursery rhyme about two sisters' misadventures with goblins, the poem is multi-layered, challenging, and complex. Critics have interpreted the piece in a variety of ways: seeing it as an allegory about temptation and salvation; a commentary on Victorian gender roles and female agency; and a work about erotic desire and social redemption - perhaps influenced by her work with the "fallen women" in Highgate. Some readers have noted its likeness to Coleridge's "Rime of the Ancient Mariner" given both poems' religious themes of temptation, sin and redemption by vicarious suffering.

Her Christmas poem "In the Bleak Midwinter" became widely known after her death when set as a Christmas carol by Gustav Holst as well as by other composers.

Rossetti continued to write and publish for the rest of her life although she focused primarily on devotional writing and children's poetry. She maintained a large circle of friends and for ten years volunteered at a home for prostitutes. She was ambivalent about women's suffrage but many scholars have identified feminist themes in her poetry. Furthermore, as Marsh notes, "she was opposed to war, slavery (in the American South), cruelty to animals (in the prevalent practice of animal experimentation), the exploitation of girls in under-age prostitution and all forms of military aggression."

In the later decades of her life, Rossetti suffered from Graves Disease. In 1893 she developed cancer, and died the following year 29 December 1894; she is buried in Highgate Cemetery. In the early 20th century Rossetti's popularity faded as many respected Victorian writers' reputations suffered from Modernism's backlash. Rossetti remained largely unnoticed and unread until the 1970s when feminist scholars began to recover and comment on her work. In the last few decades Rossetti's writing has been rediscovered and she has regained admittance into the Victorian literary canon.

"The wind is passing threw'
But when the leaves hang trembling
Neither I nor you:
Who has seen the wind?"

"O Earth, lie heavily upon her eyes; Seal her sweet eyes weary of watching, Earth; Lie close around her; leave no room for mirth With its harsh laughter, nor for sound of sighs. She hath no questions, she hath no replies, Hush's in and curtained with a bless dearth Of all that irked her from the hour of birth; With stillness that is almost Paradise. Darkness more clear than noonday holdeth her, Silence more musical than any song; Even her very heart has ceased to stir: Until the morning of Eternity Her rest shall not begin nor end, but be; And when she wakes she will not think it long."

"When I am dead my dearest, sing no sad song for me, Plant thou no roses at my head, nor shady cypress tree. See the green grass above me with showers and dewdrops wet, And if thou wilt, remember, and if thou wilt, forget. I shall not see the shadows, I shall not feel the rain, I shall not hear the nightingale sing on as if in pain. And dreaming throughout the twilight that doth not rise nor set, Hap'ly will remember, and happily will forget".

Wikiquote has a collection of quotations related to: Christina Rossetti

This article uses material from the article Christina Rossetti from the free encyclopedia Wikipedia and it is licensed under the GNU Free Documentation License.

On The Street Where You Live Christoph Grab Tough Tenor
Update Required To play the media you will need to either update your browser to a recent version or update your Flash plugin.