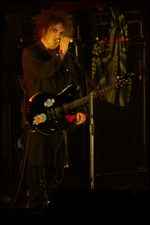 Robert James Smith (born 21 April 1959) is an English guitarist, vocalist, and songwriter. He is the lead singer and principal songwriter of the rock band The Cure, and its only constant member since its founding in 1976. NY Rock calls him "pop culture's unkempt poster child of doom and gloom", and describes his songs as "sombre introspection over lush, brooding guitars".[1] Smith is a multi-instrumentalist who can play guitar, bass guitar, double bass, keyboard, violin, flute and trumpet. His distinctive and intricate guitar playing, guitar tunings, and innovative use of flanging, chorusing and phasing effects has led him to be considered a pioneer guitarist in the new wave, indie and rock genres.

Robert Smith is the third of four children born to Alex and Rita Smith. His siblings are Richard, Margaret and Janet. Janet Smith is married to Porl Thompson, the "second" guitarist of The Cure; he and Smith switch between playing lead and rhythm guitars. Smith has been married to his childhood sweetheart, Mary Poole, since 1988;[1][2][3][4][5] the couple have opted not to have children.[6][7]

Smith was raised as a Catholic and went to Notre Dame Middle School and St. Wilfrid's Comprehensive School in Crawley. He was an accomplished student who maintained high marks, but after he began playing guitar at the age of 11 his primary focus quickly became his music. He was influenced by The Beatles, Nick Drake, Jimi Hendrix, The Stranglers, The Ink Spots, Syd Barrett and David Bowie.

Role in The Cure

When The Cure was first formed, Smith did not intend to become the lead vocalist; he only began singing after the original singer left and the group could not find a suitable vocalist. From the late 1970s and into the 1980s, Smith composed some of The Cure's songs on a Hammond organ with a built-in tape recorder, including a complete demo of the song "10:15 Saturday Night".

Smith has written or co-written the bulk of the band's music and lyrics over its 30 year lifespan. With Lol Tolhurst, Smith wrote such songs as "The Lovecats", "Let's Go to Bed", and "The Walk". He wrote the album The Top between stints as Siouxsie & the Banshees' guitarist. Smith has co-produced most of the band's material.

Smith helped popularize the "goth" style of dress with his trademark smeared red lipstick, pale complexion, artfully disheveled black hair, black clothes, and sneakers: a look that he began sporting in the early 1980s. According to Siouxsie & the Banshees bassist Steven Severin, Smith first used Siouxsie Sioux's lipstick after using opium. However, Smith claims that he has worn make-up since he was young. He was also quoted as saying, "It's so pitiful when 'goth' is still tagged onto the name The Cure."[2]

His songwriting for the band's early albums — particularly Faith, Pornography, and Disintegration — centered around themes of depression, loneliness, and isolation. The sombre mood of these early albums, along with Smith's onstage persona, cemented the band's "gothic" image.

The band's aesthetic went from gloomy to psychedelic beginning with the album The Top. In 1986, Smith further altered his image by appearing onstage and in press photos sporting short spiky hair and polo shirts (this can be seen in The Cure In Orange, a concert in the south of France released on video in 1987).

Although Smith's public persona suggests a depressed image, he has said that his songs do not convey how he feels all, or even most, of the time:

"At the time we wrote Disintegration ... it's just about what I was doing really, how I felt. But I'm not like that all the time. That's the difficulty of writing songs that are a bit depressing. People think you're like that all the time, but I don't think that. I just usually write when I'm depressed."[3]

In the band's earliest period, Smith used a soft vocal style on the demos of "10:15 Saturday Night" and "Boys Don't Cry", and a frenetic punk style on "I Just Need Myself". Both of those styles were left behind as a third emerged during the production of the band's debut album, Three Imaginary Boys. This new sound, which can be heard on most of the final versions of songs from that period, became the signature Smith sound, which he generally employed until the 2000 album Bloodflowers. Around that time, Smith said he wanted to improve his singing, the opposite of his goal in 1984: he remarked in the documentary Ten Imaginary Years that he tried to sing badly on the album The Top.

Despite the gothic "gloom and doom" image often tagged onto Smith, he has proven himself to be able to sing up-tempo songs well. Examples include "Friday I'm in Love" and "Mint Car".

In an interview in 2000, Smith said that "... there is one particular kind of music, an atmospheric type of music, that I enjoy making with the Cure. I enjoy it a lot more than any other kind of sound".[1] When Smith was asked about the 'sound' of his songwriting, Smith said that he did not "... think there is such a thing as a typical Cure sound. I think there are various Cure sounds from different periods and different line-ups."[1]

Smith has also been involved in other musical projects, including stints in 1979 and 1982–84 as guitarist with Siouxsie & the Banshees, and a side project in 1983 with Banshee bassist Steven Severin called The Glove.

In 1998, Smith formed a "one-off" side project with Jason Cooper and Reeves Gabrels under the name COGASM, releasing the track "A Sign from God" for the film Orgazmo. In 2000, Smith contributed to the track "Yesterday's Gone" on Reeves Gabrels' solo album Ulysses (Della Notte).

In 2003, Smith collaborated with the pop punk band Blink-182 on the track "All of This" on their self-titled Blink-182 album. He also provided vocals for Junior Jack for the club hit "Da Hype".

In 2004, Smith co-wrote and supplied vocals for the Tweaker song "Truth Is". Smith collaborated again with Junior Jack on a remix of "Da Hype", featured on the album Trust It. Blank & Jones remixed "A Forest" featuring Smith on vocals. He was also featured as a vocalist and co-writer on JunkieXL's "Perfect Blue Sky".

In 2005, Smith teamed up with Billy Corgan, lead singer and lead guitarist of both The Smashing Pumpkins and Zwan, to do a cover of the Bee Gees' "To Love Somebody" on Corgan's first solo release, TheFutureEmbrace.

On 9 January 1997, Smith joined David Bowie on stage at Bowie's 50th Birthday Party concert at Madison Square Garden to duet on two Bowie songs, "The Last Thing You Should Do" and "Quicksand".

In 2004, Smith stood in as one of three guest presenters for John Peel on BBC Radio 1, a week before Peel's death. In November, he joined Placebo on stage at their Wembley arena gig to sing the band's hit song "Without You I'm Nothing", as well as the Cure staple "Boys Don't Cry".

Also in 2004 Smith made a guest appearance with the popular pop-punk band Blink-182 to perform the song "All of This" and The Cure hit "Boys Don't Cry".

Smith along with his band, joined Korn onstage for the band's unplugged performance in 2006 where they played a mashup of Korn song Make Me Bad and Cure song In Between Days.

He was also in an episode of South Park, in which he battles "Mecha" Barbara Streisand in a battle that completely destroys the town of South Park. Smith looks very similar to Mothra of the Godzilla movies, but has the ability of "robot punch" to take out the "Godzilla (Mecha) version" of Streisand. In one scene, he kicks Cartman in the groin in order to get his Walkie-Talkie back from him. At the end of the episode as Smith walks off into the sunset, Kyle remarks "Disintegration is the best album ever!"

See The Cure discography from 1976 (start) to present

With Siouxsie & the Banshees

Wikiquote has a collection of quotations related to: Robert Smith (musician)

This article uses material from the article Robert Smith (musician) from the free encyclopedia Wikipedia and it is licensed under the GNU Free Documentation License.

Petite Fleur Charlie Byrd & Steve Wilson
Update Required To play the media you will need to either update your browser to a recent version or update your Flash plugin.