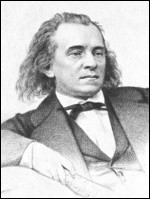 Alexander Nikolayevich Serov (Russian: , Saint Petersburg, 23 January [O.S. 11 January] 1820 – Saint Petersburg, 1 February [O.S. 20 January] 1871) was a Russian composer and music critic. He is notable as one of the most important music critics in Russia during the 1850s and 1860s and as the most significant Russian composer of opera in the period between Dargomyzhsky's Rusalka and the early operas by Cui, Rimsky-Korsakov, Mussorgsky, and Tchaikovsky.

Alexander Serov was the father of Russian artist Valentin Serov.

Serov's maternal grandfather, Carl Ludwig Hablitz,[1][2][3][4] was a botanist and a German Jew, who moved from Germany to Russia in the 18th century, as was common at the time, since Russia invited many European experts, including scientists, musicians, physicians, etc. in order to catch up with the European developments. In Russia, he became a member of the Petersburg Academy of Sciences. Alexander Serovs father was a lawyer and held an important position.[5] He wanted Alexander Serov to become a lawyer as well and sent him to a law school.[5] Eventually Serov lost interest in law and developed interest in music. Additionally, he became a friend of another law school student, Vladimir Stasov,[1][5][6] who eventually became a famous art critic.[7] Serov and Stasov spent more time studying music that studying law.

Serov completed his studies in 1840 and started working as a lawyer. Eventually, his interest in music prevailed, and in 1850 he quit his job and began to compose music and to write articles. His was also giving music lectures which were quite popular.[1] In particular, he introduced a variety of music terms into Russian language. Additionally, he first started to use the term simfonizm which eventually gained international significance.[8] In 1863, Alexander Serov married his student Valentina Bergman.[2] In 1871, he unexpectedly died of a heart attack. His widow finished his last opera and published his articles.

As composer, Serov is notable for composing operas. His first opera, Judith, was first performed in 1863. Although Serov's operas Judith and Rogneda were quite successful at the time, none of his operas are frequently performed today.[9] A CD recording of Judith (with some cuts) was made in 1991 by the orchestra and choir of the Bolshoi Theatre under conductor Andrey Chistiakov.

Whereas Serov was an acclaimed critic and composer, his relation with fellow intellectuals were sometimes far from ideal. For example, he and Stasov became enemies over the relative values of Glinka's two operas.[1] Serov's admiration for Richard Wagner likewise did not endear him to The Mighty Handful, the principal group of Russian composers, mainly due to efforts of the younger competing critic César Cui, who, like Stasov, had been on better terms with Serov earlier.[1]

This article uses material from the article Alexander Serov from the free encyclopedia Wikipedia and it is licensed under the GNU Free Documentation License.

Casa Pantrovà Zut / Eliane Cueni & Susanne Müller
Update Required To play the media you will need to either update your browser to a recent version or update your Flash plugin.