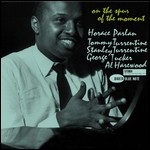 Horace Parlan (January 19, 1931, Pittsburgh, Pennsylvania – February 23, 2017, Korsør, Denmark[1]) was an American hard bop and post-bop pianist and composer. He was known for his contributions to the Charles Mingus recordings Mingus Ah Um and Blues & Roots.

In his birth year, Parlan was stricken with polio, resulting in the partial crippling of his right hand. The handicap contributed to his development of a particularly "pungent" left-hand chord voicing style, while comping with highly rhythmic phrases with the right.[2]

Between 1952 and 1957, he worked in Washington DC with Sonny Stitt, then spent two years with Mingus' Jazz Workshop.[2] In 1973, Parlan moved to Copenhagen, Denmark. He later settled in the small village of Rude in southern Zealand. In 1974 he completed a State Department tour of Africa with Hal Singer.[2]

His later work, such as a series of duos with the tenor saxophonist Archie Shepp included the album Goin' Home, steeped in gospel music.

With Al Cohn and Zoot Sims

This article uses material from the article Horace Parlan from the free encyclopedia Wikipedia and it is licensed under the GNU Free Documentation License.

My Way = Comme d'habitude Barney Wilen
Update Required To play the media you will need to either update your browser to a recent version or update your Flash plugin.