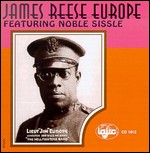 James Reese Europe (22 February 1881 – 9 May 1919) was an American ragtime and early jazz bandleader, arranger, and composer. He was the leading figure on the African-American music scene of New York City in the 1910s. Eubie Blake called him the "Martin Luther King of music."[1]

James "Jim" Reese Europe was born in Mobile, Alabama. His family moved to Washington, D.C. when he was 10 years old. He moved to New York in 1904.

In 1910 Europe organized the Clef Club, a society for African Americans in the music industry. In 1912, the club made history when it played a concert at Carnegie Hall for the benefit of the Colored Music Settlement School. The Clef Club Orchestra, while not a jazz band, was the first band to play proto-jazz at Carnegie Hall. It is difficult to overstate the importance of that event in the history of jazz in the United States it was 12 years before the Paul Whiteman and George Gershwin concert at Aeolian Hall, and 26 years before Benny Goodman's famed concert at Carnegie Hall. The Clef Club's performances played music written solely by black composers, including Harry T. Burleigh and Samuel Coleridge-Taylor.[2] Europe's orchestra also included Will Marion Cook, who had not been in Carnegie Hall since his own performance as solo violinist in 1896. Cook was the first black composer to launch full musical productions, fully scored with a cast and story every bit as classical as any Victor Herbert operetta. In the words of Gunther Schuller, Europe "...had stormed the bastion of the white establishment and made many members of New York's cultural elite aware of Negro music for the first time."[3] The New York Times remarked, These composers are beginning to form an art of their own, yet by their third performance a review in Musical America said Europes Clef Club should give its attention during the coming year to a movement or two of a Haydn Symphony.[4]

Europe was known for his outspoken personality and unwillingness to bend to musical conventions, particularly in his insistence on playing his own style of music. He responded to criticism by saying, We have developed a kind of symphony music that, no matter what else you think, is different and distinctive, and that lends itself to the playing of the peculiar compositions of our raceMy success had comefrom a realization of the advantages of sticking to the music of my own people. And later, We colored people have our own music that is part of us. Its the product of our souls; its been created by the sufferings and miseries of our race.[4]

His "Society Orchestra" became nationally famous in 1912, accompanying theater headliner dancers Vernon and Irene Castle. The Castles introduced and popularized the foxtrot "America learned to dance from the waist down." In 1913 and 1914 he made a series of phonograph records for the Victor Talking Machine Company. These recordings are some of the best examples of the pre-jazz hot ragtime style of the U.S. Northeast of the 1910s.[5] These are some of the most accepted quotes that are in place to protect the idea that the Original Dixieland Jass Band recorded the first jass (spelling later changed) pieces in 1917 for Victor. Unlike Europe's post-War recordings, the Victor recordings were not called nor marketed as "jazz" at the time, and were far from the first recordings of ragtime by African-American musicians.

Neither the Clef Club Orchestra nor the Society Orchestra were small "Dixeland" style bands. They were large symphonic bands to satisfy the tastes of a public that was used to performances by the likes of the John Phillip Sousa band and similar organizations very popular at the time. The Clef Orchestra had 125 members[6] and played on various occasions between 1912 and 1915 in Carnegie Hall. It is instructive to read a comment from a music review in the New York Times from March 12, 1914: "...the programme consisted largely of plantation melodies and Spirituals ...[arranged such as to show that]...these composers are beginning to develop an art of their own based on their folk material..."[7]

During World War I Europe obtained a Commission in the New York Army National Guard, where he saw combat as a lieutenant with the 369th Infantry Regiment (the "Harlem Hellfighters"). He went on to direct the regimental band to great acclaim. In February and March 1918, James Reese Europe and his military band travelled over 2,000 miles in France, performing for British, French and American military audiences as well as French civilians. Europe's "Hellfighters" also made their first recordings in France for the Pathé brothers.[8] The first concert included a French march, and the Stars and Stripes Forever as well as syncopated numbers such as "The Memphis Blues", which, according to a later description of the concert by a band member "...started ragtimitis in France".[9]

After his return home in February 1919 he stated, I have come from France more firmly convinced than ever that Negros should write Negro music. We have our own racial feeling and if we try to copy whites we will make bad copiesWe won France by playing music which was ours and not a pale imitation of others, and if we are to develop in America we must develop along our own lines.[4] In 1919 Europe made more recordings for Pathé Records. These include both instrumentals and accompanyments with vocalist Noble Sissle who, with Eubie Blake, would later have great success with their 1921 production of Shuffle Along, which gives us the classic song "I'm Just Wild About Harry". Differing in style from Europe's recordings of a few years earlier, they incorporate blues, blue notes, and early jazz influences (including a rather stiff cover record of the Original Dixieland Jass Band's "Clarinet Marmalade").

On the night of May 9, 1919, Europe performed for the last time. He had been feeling extremely ill all day, but wanted to continue on with the concert (which was to be the first of three in Bostons Mechanics Hall). During the intermission Europe went to have a talk with two of his drummers, Steve and Herbert Wright. After Europe criticized some of their behavior (walking off stage during others performances), Herbert Wright became very agitated and threw his drumsticks down in a seemingly unwarranted outburst of anger. He claimed Europe did not treat him well and that he was tired of getting blamed for others mistakes. He lunged for Europe with a pen knife and was able to stab Europe in the neck. Europe told his band to finish the set and he would see them the next morning. It would be the last time they saw him alive.[10]

News of Europes death spread fast to a stunned public. W. C. Handy wrote: The man who had just come through the baptism of wars fire and steel without a mark had been stabbed by one of his own musiciansThe sun was in the sky. The new day promised peace. But all the suns had gone down for Jim Europe, and Harlem didnt seem the same. Europe was granted the first ever public funeral for an African American in the city of New York. Tanney Johnson said of his death: Before Jim Europe came to New York, the colored man knew nothing but Negro dances and porters work. All that has been changed. Jim Europe was the living open sesame to the colored porters of this city. He took them from their porters places and raised them to positions of importance as real musicians. I think the suffering public ought to know that in Jim Europe, the race has lost a leader, a benefactor, and a true friend. [10]

At the time of his death he was the best-known African-American bandleader in the United States. He is buried in Arlington National Cemetery.[11]

This article uses material from the article James Reese Europe from the free encyclopedia Wikipedia and it is licensed under the GNU Free Documentation License.