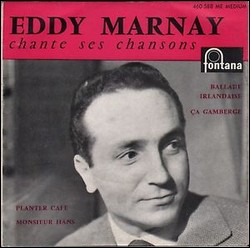 Eddy Marnay, the professional name of Edmond Bacri, (Algiers, 18 December 1920 – 3 January 2003), was a French Jewish songwriter. In his career, he wrote more than 4000 songs, including works for Édith Piaf, Frida Boccara and Céline Dion. He was joint winner, as lyricist, of the Eurovision Song Contest in 1969 for Un Jour, Un Enfant, sung by Frida Boccara.[1] He also wrote the title song for Charlie Chaplin's 1957 film A King in New York.

Céline Dion named one of her sons after him in 2010.

This article uses material from the article Eddy Marnay from the free encyclopedia Wikipedia and it is licensed under the GNU Free Documentation License.

Yaht Doo Daht Ditt Wycliffe Gordon
Update Required To play the media you will need to either update your browser to a recent version or update your Flash plugin.