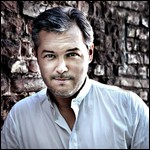 After hearing one of Repin's performances, violinist Yehudi Menuhin said: "Vadim Repin is simply the best and most perfect violinist that I have ever had the chance to hear."[2][3][4]

Vadim Repin was born in Novosibirsk, Western Siberia, on 31 August 1971. He began to play the violin at the age of five with Dmitry Vaks, on the initiative of which two years later he moved to study with Zakhar Bron, the famous violin teacher. At only eleven, he won the gold medal in all age categories in the International Competition for Young Violinists in Honor of Karol Lipinski and Henryk Wieniawski held in Lublin and gave his recital débuts in Moscow and St Petersburg. In 1985 at fourteen he made his débuts in Tokyo, München, Berlin, Helsinki; a year later in Carnegie Hall.

Vadim Repin has been a frequent guest at festivals such as the BBC Proms, Tanglewood, Gstaad and Verbier.[6] In 2010 he played the premiere of James MacMillan Violin Concerto with the London Symphony Orchestra under Gergiev which was dedicated to him.[7]

The majority of Repin's recordings through 2005 were on the Erato label. However, in 2005 Repin appeared on Deutsche Grammophon (DG) on a disc of chamber music by Sergei Taneyev alongside Mikhail Pletnev, Ilya Gringolts, Nobuko Imai, and Lynn Harrell; and in April 2006 Repin signed an exclusive recording contract with DG.

His preferred bows are by Nicolaus Kittel and Nicolas Maline.

Vadim Repin married Caroline Diemunsch in 2001. Their son Leonardo was born in 2006.[9]

His current partner[10] is Svetlana Zakharova, the principal dancer of the Bolshoi Ballet.[11] They have a daughter, born in February 2011.[12]

This article uses material from the article Vadim Repin from the free encyclopedia Wikipedia and it is licensed under the GNU Free Documentation License.