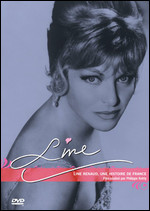 Line Renaud was born in Pont-de-Nieppe on 2 July 1928. Her mother Simone was a shorthand typist; her father was a truck driver during the week, but he played the trumpet on weekends, in a local brass band. Line showed the first signs of her talent in primary school, when at the age of seven she won an amateur competition.

During the Second World War, Jacqueline's father was mobilised, spending five years away from the family. During this time, Jacqueline was brought up by her mother, grandmother and great-grandmother. Her grandmother had a café in Armentières, where she used to sing for passing soldiers.

She auditioned at Conservatoire de Lille, singing songs written by Loulou Gasté "Sainte-Madeleine" and "Mon âme au diable". Louis Gasté was at that time a well known French composer. At the end of the audition, she was approached by the director of Radio Lille who was looking for a singer. She took the pseudonym of Jacqueline Ray and joined the station singing a repertoire based on the songs by Loulou Gasté. In 1945, she moved to Paris and got her first gig in Folies Belleville, where she was introduced to Gasté. She was 16, and Gasté was 37. He became her mentor, changing her image and her name.

Line Renaud made her national debut on Radio Luxembourg, singing on a Sunday morning program. After signing a contract with Pathe Marconi, she recorded "Ma Cabane au Canada", written by Loulou Gasté, which won le Grand Prix du Disque. She also sang with Yves Montand in the Théâtre de l'Etoile. She did a big tour of Europe and Africa, came back to Paris to star at the ABC and recorded numerous adaptations of American songs such as "Ma petite folie", "Etoile des neiges" and "Le chien dans la vitrine".

In 1954, whilst performing at Moulin Rouge she met Bob Hope and consequently appeared in five episodes of The Bob Hope Show in the US. During this trip, she also sang in the Waldorf Astoria (New York) and the Cocoanut Grove (Los Angeles), appeared on Johnny Carson, Dinah Shore and Ed Sullivan shows and recorded with Dean Martin the song Relax ay voo.

In 1959, she started a four-year run of Plaisir de Paris for Henri Varna and then went on to perform in a Las Vegas show at Dunes from 1963 to 1965. In 1966 she returned to Paris and the Casino de Paris starring in a new show, Desir de Paris. In 1968, she returned to Las Vegas for a number of performances. In France, in 1973 she created an American show which she toured for two years around the country. She then helped Casino de Paris, threatened by closing, by putting on a show called Paris Line with Loulou Gasté, which ran for four years.

In the 1980s, she starred in a TV show Telle est Line for Antenne 2 and recorded songs in English and French. At Casino de Paris, she put on a one off show which retraced her forty-year career. Also, in 1981, she served as an unofficial on-air "guide" for Merv Griffin when he taped "The Merv Griffin Show" in Paris. In 1989, she toured around Japan as part of a festival which marked the bicentennial of the French Revolution.

In 2000, a Golden Palm Star on the Palm Springs, California, Walk of Stars was dedicated to her.[1]

In 2009, as Vice-President of Sidaction, she condemned the statements of Pope Benedict XVI, who claimed that condoms promote AIDS.[2]

This article uses material from the article Line Renaud from the free encyclopedia Wikipedia and it is licensed under the GNU Free Documentation License.

Le temps d'un jazz Daniel Roure
Update Required To play the media you will need to either update your browser to a recent version or update your Flash plugin.