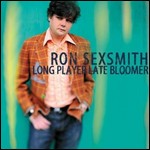 Ronald Eldon "Ron" Sexsmith (born 8 January 1964) is a Canadian singer-songwriter from St. Catharines, Ontario.[1] He was the songwriter of the year at the 2002 Juno Awards. He began releasing recordings of his own melancholic pop material in 1985 at age 21, and has since recorded fifteen albums. He was the subject of a 2010 documentary called Love Shines.[2]

Sexsmith grew up in St. Catharines and started his own band when he was 14 years old.

Sexsmith was seventeen when he started playing at a bar, the Lion's Tavern, in his hometown. He gained a reputation as "The One-Man Jukebox" for his aptitude for playing requests. However, he gradually began to include original songs and more obscure music which his audience did not favour.[1] He decided to start writing songs after the birth of his first child[3] in 1985. That same year, still living in St. Catharines, he collaborated on recording and releasing a cassette, Out of the Duff, with a singer-songwriter friend named Claudio. Side one of the cassette contained five songs written and performed by Sexsmith; side two featured Claudio.

A year later, Sexsmith and his family moved to Toronto, living in an apartment in The Beaches neighbourhood. Still in 1986, Sexsmith recorded and released the full-length cassette There's a Way, which was produced by Kurt Swinghammer.[4][1] Meanwhile, he worked as a courier, and befriended Bob Wiseman whom he met at an open stage. They became friends, and Wiseman agreed to produce and arrange Sexsmith's next release in between his tours with the band Blue Rodeo. Because of Wiseman's busy schedule, work on the album stretched out over several years.

After the album, Grand Opera Lane was rejected by several Canadian labels, the pair released it independently in 1991. Grand Opera Lane was credited to "Ron Sexsmith and the Uncool"; the backing band was Don Kerr and Steve Charles, and also featured Sarah McElcheran (horn arrangements) and Kim Ratcliffe on electric guitar. On the strength of this album, and the attention garnered by the song "Speaking with the Angel", Sexsmith earned a contract which led to his self-titled album in 1995. The album was praised by Elvis Costello, for whom Sexsmith later opened.[5]

Between 1997 and 2001, Sexsmith released three more albums, and then Cobblestone Runway in 2002.[4] Retriever, his next album, is a more pop-oriented album and is dedicated to Elliott Smith and Johnny Cash. In 2004, he performed at the RuhrTriennale in the concert series Century of Song hosted by Grammy Award-winner Bill Frisell.

On 1 May 2001, Sexsmith performed "Just My Heart Talkin'" on the BBC's Later... with Jools Holland musical showcase, alongside R.E.M., Orbital, India.Arie, and Clearlake. Holland backed him on piano. It was his second appearance on the show. He began to have some radio success, particularly on Canadian adult oriented radio.

In 2002, Sexsmith recorded a cover version of "This Is Where I Belong", the title track for a tribute album called This Is Where I Belong – The Songs of Ray Davies and the Kinks, and including contributions from Damon Albarn, Bebel Gilberto and Queens of the Stone Age, among others. In 2006, he performed at the Halifax Pop Explosion.[6]

On 16 June 2011 Sexsmith and his band performed the Kinks' song "Misfits" with Ray Davies at the Meltdown Festival in London, England. The same year, he won a songwriter of the year Juno Award for "Whatever it Takes".[7] and a Canadian Indy Award.[8]

In 2011, the album Long Player Late Bloomer was shortlisted for the Polaris Music Prize.

Sexsmith's 14th full-length work, the album Carousel One, was released in March, 2015.

In 2017, Sexsmith published his debut novel Deer Life with Dundurn Press. It was well received and Publishers Weekly wrote that the "novel has much the same effect as his music, conveying uncertainty with fearlessness and heart."[9]

Sexsmith has collaborated with many artists. Sexsmith sang on "An Elephant Insect" which appears on the 2003 Shonen Knife album Heavy Songs. In 2005, he released a collection of songs recorded with drummer Don Kerr during the production of Retriever, called Destination Unknown. Also in 2005, Sexsmith sang on the track "Song No. 6" by Norwegian singer-songwriter Ane Brun, which featured on her album A Temporary Dive and again on her Duets album later the same year. In 2006 he performed a duet of "So Long Marianne" with Leonard Cohen in Yorkville, Toronto. In 2014 he wrote and sang a duet together with Dutch singer-songwriter Marike Jager, the song "Don't you" featured on her album The Silent Song.

Sexsmith's songs have been performed and recorded by a number of well-known musicians, including Elvis Costello, Feist, Rod Stewart, Emmylou Harris [10] His song "Secret Heart" has been covered by Rod Stewart, Feist, and Nick Lowe. Sexsmith co-wrote "Brandy Alexander" with Feist—versions appear on Sexsmith's Exit Strategy of the Soul, and on Feist's album The Reminder. A version of Sexsmith's "Whatever It Takes" appeared on Michael Bublé's 2009 album Crazy Love.

In 2010, Sexsmith appeared on "Liberace", a track off the album Vaudeville by Canadian rapper D-Sisive. In 2012 his song "Gold in them Hills" was included on Katie Melua's album Secret Symphony, and "Right About Now" was covered by Mari Wilson on the album "Cover Stories".

In 2012, Sexsmith appeared on Lowe Country: The Songs of Nick Lowe, a Nick Lowe tribute album, where he covered Lowe's 1994 song "Where's My Everything?".[11]

Sexsmith sang the lead vocal on a song from Ryan Granville-Martin's 2013 album Mouthparts and Wings which features a different vocalist on each song.[12]

Sexsmith is the subject of the film Love Shines, directed by Douglas Arrowsmith and produced by Paperny Films. Love Shines premiered at the Vancouver International Film Festival in 2010.[13]

Sexsmith has a book that was released on September 16, 2017, called Deer Life. It has been described as a "grown up fairy tale" by Sexsmith himself. Deer Life is Sexsmith's first effort as an author.

As well as being a critically acclaimed songwriter and musician, Sexsmith has a healthy group of world class musicians who appreciate his work including Paul McCartney, Elvis Costello, Chris Martin, Elton John, Ray Davies, Steve Earle, Bob Rock, and Sheryl Crow. Ron also has a loyal fanbase called the Ronheads.

His first five albums are generally melancholic pop folk with elegant melodies, accentuated use of guitars and economic application of other instruments. On his sixth album, Cobblestone Runway, producer Martin Terefe supplemented this style with, among other things, synthesizers, back-up singers, gospel choirs, and string sections.[14] Long Player Late Bloomer is considered his most pop-influenced album, which also happens to be his most commercially successful. His two latest albums, Carousel One and The Last Rider are more rock and roll albums that take Sexsmith back to the music of his childhood.

Sexsmith has two children (Christopher and Evelyne) with his former wife, Jocelyne.[15] Their fifteen-year marriage ended in 2001.[14]

Sexsmith's partner, Colleen Hixenbaugh, is also a musician. She is a member of By Divine Right, half of the duo Jack and Ginger,[16] and the duo Colleen and Paul with Paul Linklater.

This article uses material from the article Ron Sexsmith from the free encyclopedia Wikipedia and it is licensed under the GNU Free Documentation License.