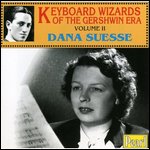 While still a child, Suesse toured the Midwest vaudeville circuits with an act centered on dancing and piano playing. During the recital, she would ask the audience for a theme, and then proceed to take that theme, weaving it into something of her own. In 1926, she and her mother moved to New York City.

Suesse began to create larger scale pieces from which she would extrapolate a phrase and then set that tune to words, collaborating with a lyricist. "My Silent Love" (which came from a larger piece called "Jazz Nocturne"), and "You Ought to Be in Pictures" are among her most well-known and popular hits. She collaborated with lyricist Eddie Heyman on "You Ought to Be in Pictures" in addition to other hits, including "Ho-Hum." The 1930s press called Suesse "the girl Gershwin." Fortune, a magazine then devoted to male achievement, included Dana's photo alongside eight other veterans of the music business, with the headline, "Nine Assets of a Prosperous Organization" (January 1933).

While in New York, Suesse studied piano under Alexander Siloti, Franz Liszt's last surviving pupil. She studied composition under Rubin Goldmark, one of George Gershwin's teachers, and spent three years studying with Nadia Boulanger after World War II. In 1931, bandleader Paul Whiteman (following Gershwin's Rhapsody in Blue) commissioned her to write "Concerto in Three Rhythms." In early 1932, she recorded a piano roll of the Sammy Fain and Irving Kahal popular tune 'Was That The Human Thing To Do' for the Aeolian Company's Duo-Art reproducing piano system. Beginning in 1930, Suesse formed a song writing partnership with impresario Billy Rose (usually in collaboration with other lyricists) that lasted into the 1940s. In 1936 Suesse lived in Fort Worth, Texas for three months to compose the score for Rose's Casa Manaña, the spectacular outdoor dinner theatre of the Fort Worth (Texas) Frontier Centennial. With Rose and Irving Kahal she composed "The Night Is Young And You're So Beautiful," which won fifth place on Your Hit Parade on the broadcast of February 6, 1937, and stayed on the program for six weeks. The Jan Garber, George Hall and Wayne King orchestras all recorded it in 1937, and in 1951 Ray Anthony's orchestra made it a hit again. On June 13, 1937 Amon G. Carter arranged for Billy Rose and Suesse to attend a dinner at the White House as guests of President and Mrs. Franklin D. Roosevelt. After dinner, music from Casa Manana was performed by one of the show's stars, Everett Marshall. Subsequently, many songs were written with Rose, including "Yours For A Song" (in collaboration with lyricist Ted Fetter), the theme of Billy Rose's Aquacade of the 1939 New York World's Fair. In the 1940s Suesse was Rose's staff composer for his legendary Diamond Horseshoe Revues. With lyricist E.Y. "Yip" Harburg Suesse wrote "Moon About Town" (for Jane Froman in the Ziegfeld Follies of 1934) and "Missouri Misery," both published in 1934.

After her success in writing popular songs (other lyricists included Harold Adamson, Sam Coslow) Suesse moved to Paris for three years to privately study composition with Nadia Boulanger. Boulanger accepted Dana as a student on the recommendation of the great orchestrator, and Suesse's tennis partner, Robert Russell Bennett.

On December 11, 1974, Suesse and her husband produced a symphony concert at Carnegie Hall, devoted exclusively to her compositions. (In the 1990s, Robert Stern produced a CD of the concert using masters from Voice Of America.) On July 31, 1975, the Newport Music Festival (Rhode Island) presented four of her works in their concert series. A year after the Carnegie Hall concert, Suesse and her husband moved to the U.S. Virgin Islands. After her husband's death in 1981 she moved back to New York, the city where she had spent her most creative years. She took two apartments in the Gramercy Park Hotel and continued to write plays and songs for the theatre. Just before her death from a stroke on October 16, 1987, she was writing a new musical, putting the finishing touches on Mr. Sycamore, which had been optioned for off-Broadway, and was looking for a New York home for a straight play, Nemesis. On September 24, 2003, John McGlinn conducted the BBC Concert Orchestra (UK) in a performance of American music that included three compositions by Suesse.

This article uses material from the article Dana Suesse from the free encyclopedia Wikipedia and it is licensed under the GNU Free Documentation License.

Clodi Clodo Marc Hemmeler
Update Required To play the media you will need to either update your browser to a recent version or update your Flash plugin.