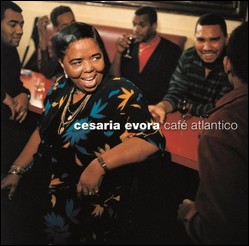 Cesária Évora, GCIH (Portuguese pronunciation: [sɨˈzaɾiɐ ˈɛvuɾɐ]; 27 August 1941 – 17 December 2011) was a Cape Verdean vocalist and recording artist. Nicknamed the "Barefoot Diva" for performing without shoes,[1] she was also known as the "Queen of Morna".[2]

"Cise" (as she was known to friends) was born on 27 August 1941 in Mindelo, São Vicente, Cape Verde. When she was seven years old her father, Justino da Cruz Évora who was a part-time musician,[3] died, and at the age of ten she was placed in an orphanage, as her mother Dona Joana could not raise all six children. At the age of 16, she was persuaded by a friend to sing in a sailors' tavern.[2]

She grew up at the famous house in Mindelo where other singers used from the 1940s to the 1970s, at 35 Rua de Moeda. Other Cape Verdean singers came to the place including Djô d'Eloy, Bana, Eddy Moreno, Luis Morais and Manuel de Novas (also as Manuel d'Novas), there she received her musical education.

In the 1960s, she started singing on Portuguese cruise ships stopping at Mindelo as well as on the local radio. It was only in 1985 when at the invitation of Cape Verdean singer Bana she went to perform in Portugal. In Lisbon she was discovered by the producer José da Silva and invited to record in Paris.[4]

She recorded a track "Ausência" which was released in a soundtrack to the film Underground (1995) by Emir Kusturica and is the second track.

Évora's international success came only in 1988 with the release of her first commercial album La Diva Aux Pieds Nus, recorded in France. Prior to the release of the La Diva Aux Pieds Nus album, Cesaria recorded her first LP titled "Cesaria" in 1987. This Album was later released on CD in 1995 as Audiophile Legends.[2] Her 1992 album Miss Perfumado sold over 300,000 copies worldwide.[5] It included one of her most celebrated songs, "Sodade".

In 1994, Bau joined her touring band and two years later, he became her musical director up to September 1999.

Her 1995 album Cesária brought her broader international success and the first Grammy Award nomination.[2] In 1997, she won KORA All African Music Awards in three categories: "Best Artist of West Africa", "Best Album" and "Merit of the Jury".[6] In 2003, her album Voz d'Amor was awarded a Grammy in the World music category.[2]

In 2006 in Italy Cesaria met Alberto Zeppieri (songwriter, journalist and record producer), who would dedicate to her "Capo Verde, terra d'amore" (www.capoverde-italia.it), taking care of all creative adaptations in Italian. Cesaria agreed to duet with Gianni Morandi [2], Gigi D'Alessio [3] and Ron [4]. The project, now in its fifth volume, gives visibility and raises funds for the UN World Food Programme, for which Cesaria was the Ambassador from 2003.[7]

Later in 2006, she released her next album Rogamar it was a success and charted six European countries including France, Poland and the Netherlands. On her tour in Australia in 2008, she suffered a stroke. In 2009, she released her final album Nha Sentimento which was recorded in Mindelo and Paris by José da Silva, the album reached number 6 in Poland and number 21 in France.

In 2009, she was made a knightess of the French Legion of Honour by the French French Minister of Culture and Communications Christine Albanel, the first Cape Verdean who became one.

She was awarded for the last time at the 2010 Kora All African Music Awards for the "Merit of the Jury" for the second time.

Cesària Évora dated Eduardo de Jon Xalino when she lived at Rua de Moeda, she was also a singer, relative of the great Bana.

Her cousin was another singer Hermínia da Cruz Fortes, she was an aunt of António da Rocha Évora and Xavier da Cruz.

In 2010, Évora performed a series of concerts, the last of which was in Lisbon on 8 May. Two days later, after a heart attack, she underwent surgery at a local hospital in Paris. On the morning of 11 May 2010 she was taken off artificial pulmonary ventilation, and on 16 May she was discharged from the intensive-care unit and transported to a clinic for further treatment. In late September 2010, Évora's agent announced that she was ending her career due to poor health.[9]

On 17 December 2011, aged 70, Évora died in São Vicente, Cape Verde, from respiratory failure and hypertension.[10] A Spanish newspaper reported that 36 hours before her death she was still receiving people – and smoking – in her home in Mindelo, popular for always having its doors open.[11]

This article uses material from the article Cesária Évora from the free encyclopedia Wikipedia and it is licensed under the GNU Free Documentation License.

It's Been So Long Three's A Crowd
Update Required To play the media you will need to either update your browser to a recent version or update your Flash plugin.