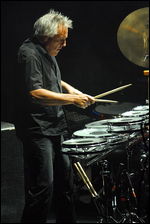 Graham Broad (born 10 March 1957, Hammersmith, West London, England) is an English drummer who has been playing professionally since the age of fifteen, after attending the Royal College of Music in 1970.

One of the most prolific drummers of the 1980s, his work appeared on Top 10 hits for Bucks Fizz, Dollar, Tina Turner, Bardo, Go West, Five Star, ABC, and Wham!.

Broad has been mostly playing with ex-Pink Floyd frontman Roger Waters, since 1987, where he played the drums on Waters' Radio KAOS album and following tour. In 1990, Broad, who had joined Waters' "Bleeding Heart Band", performed onstage during The Wall Concert in Berlin. In 1992, he played on Waters' third solo album, Amused To Death. In 1999, Waters' invited him to join him on his In the Flesh tour, which spanned three years from 1999 to 2002. Broad also participated on The Dark Side of the Moon Live tour, which began in June 2006 and was extended with additional shows to finish in the spring of 2008. Broad will be playing with Roger Waters again in the 2010 version of The Wall, touring North America and Europe.

This article uses material from the article Graham Broad from the free encyclopedia Wikipedia and it is licensed under the GNU Free Documentation License.