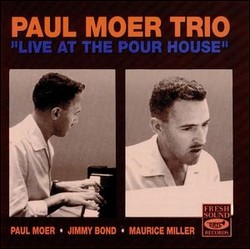 Moer attended the University of Miami, graduating in 1951, and following this played frequently on the West Coast jazz scene with Benny Carter, Vido Musso, Zoot Sims, Stan Getz, Bill Holman, and Shorty Rogers. Moer did extensive work in Los Angeles studios as a pianist and an arranger. He led his own trio in the late 1950s with Jimmy Bond and Frank Butler. In 1960 he toured Australia with Benny Carter. He also recorded with Charles Mingus, Jack Montrose, John Graas, Paul Horn (1960–63), Ruth Price, and Buddy DeFranco.

Moer played little after the 1960s, though he made a comeback with a release in 1991 of Elmo Hope tunes.

This article uses material from the article Paul Moer from the free encyclopedia Wikipedia and it is licensed under the GNU Free Documentation License.

That's A Plenty Kenneth Jethro Burns
Update Required To play the media you will need to either update your browser to a recent version or update your Flash plugin.