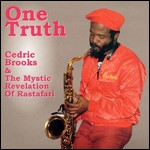 Cedric "Im" Brooks (1943 3 May 2013) was a Jamaican saxophonist and flautist known for his solo recordings and as a member of The Mystic Revelation of Rastafari, The Sound Dimensions, The Light of Saba, and The Skatalites.

Brooks became a pupil at the renowned Alpha Boys School aged 11, where he learned music theory and clarinet.[1][2] In his late teens he took up tenor saxophone and flute.[2]

Brooks was a member of groups such as The Vagabonds and the Granville Williams Band in the early 1960s, but it would be the late 1960s when he would find his first major commercial success, as part of a duo with trumpeter David Madden, Im & David.[2] The duo released a series of instrumental singles for Clement "Coxsone" Dodd's Studio One label. Brooks also became a regular studio musician at the Brentford Road studio, playing on many recording sessions, and released several solo singles in the early 1970s.[2][3]

In 1970 he first teamed up with Rastafarian drummer Count Ossie, releasing tracks such as "So Long Rastafari Calling", "Black is Black", and "Give Me Back My Language and Culture" as Im and Count Ossie. The pair would later form The Mystic Revelation of Rastafari, with Brooks acting as musical director and leader of the horn section. From this collaboration resulted the triple LP-Set Grounation. Brooks left in 1974 to form a new band, the Divine Light (later called The Light of Saba). After a single, "Demauungwani", the group recorded their first album for the Institute of Jamaica, From Mento to Reggae to Third World Music, a collection exploring the history of Jamaican music, incorporating mento, junkanoo, ska, rocksteady, and reggae.[2] The band made two further albums of jazz-influenced Rastafarian reggae,[4] The Light of Saba and The Light of Saba in Reggae, before Brooks left, again going solo with his 1977 album, Im Flash Forward, featuring Studio One rhythms from the early 1970s, and regarded as one of the greatest Jamaican instrumental albums.[2][3] The following year, Brooks assembled a new band of musicians to record the United Africa album.

During the 1980s and 1990s, Brooks released a few singles but largely worked as a session musician. In particular, he worked with Carlos Malcolm in San Diego, California, in 1998 as part of a 20-piece ska and mento orchestra known as "Zimbobway's King Kingston Orchestra". These albums featured Im both on saxophone and percussion in many of the 24 recordings. In 1999, after the death of Rolando Alphonso, former saxophonist of the Skatalites, Brooks joined the band.[4]

Brooks died in the New York Hospital, Queens, New York on 3 May 2013 after suffering a cardiac arrest.[5]

With Count Ossie and the Mystic Revelation of Rastafari

With The Light of Saba

This article uses material from the article Cedric Brooks from the free encyclopedia Wikipedia and it is licensed under the GNU Free Documentation License.