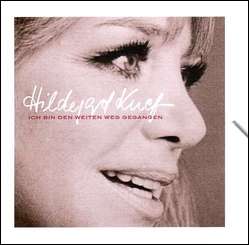 Not to be confused with Hildegarde.

Hildegard Frieda Albertine Knef (December 28, 1925February 1, 2002) was a German actress, singer, and writer. She was billed in some English language films as Hildegard Neff or Hildegarde Neff.

Hildegard Knef was born in Ulm. She began studying acting at the age of 14, in 1940. She appeared in several films before the fall of the Third Reich, but most were released only afterward. During the Battle of Berlin, Knef dressed as a soldier in order to stay with her lover Ewald von Demandowsky, and joined him in the defence of Schmargendorf.[1] The Soviets captured her and sent her to a prison camp.[2]

Her two best known film roles were "Susanne Wallner" in Wolfgang Staudte's film Die Mörder sind unter uns (The Murderers Are Among Us), produced in 1946 by the East German state film company, and the first film released after the Second World War in East Germany; and "Marina" in Die Sünderin (The Sinner), in which she performed a brief nude scene, the first in German film history, which caused a scandal in 1950.[3]

In the 1960s, she appeared in a number of such low-budget films as The Lost Continent.

She appeared in the 1975 screen adaptation of the Hans Fallada novel, Every Man Dies Alone directed by Alfred Vohrer,[4] released in English as Everyone Dies Alone in 1976,[5] and for which she won an award for best actress at the International Film Festival in Carlsbad,[6][7] then Czechoslovakia.

David O. Selznick invited her to Hollywood, but she refused to agree to the conditions of the contract which reportedly included changing her name to Gilda Christian and pretending to be Austrian rather than German.[8]

Years later, Knef's first husband, an American named Kurt Hirsch, encouraged her to try again for success in the U.S. She changed her name from Knef to Neff and achieved a measure of stardom on Broadway as "Ninotchka" in the musical Silk Stockings (1955) by Cole Porter.

She began a new career in 1963 as a singer and surprised her audiences with the deep, smoky quality of her voice and the many lyrics, which she wrote herself. Fans around the world rallied in her support as she defeated cancer several times. She returned to Berlin after the reunification.

In the 1960s and 1970s, she enjoyed considerable success as a singer of German chansons, which she often co-wrote. The song she is mostly remembered for is "Für mich soll's rote Rosen regnen" ("Red roses are to rain for me"). She is also known for her version of the song "Ich hab noch einen Koffer in Berlin" ("I still have a suitcase in Berlin") and "Mackie Messer" ("Mack the knife").[9] She sold more than three million records in total.

She published several books. Her autobiography Der geschenkte Gaul - Bericht aus einem Leben (The Gift Horse - Report of a Life, 1970) was a candid recount of her life in Germany during and after World War II, and reportedly became the best-selling German book in the post-war years. Her second book Das Urteil (The Verdict, 1975) was a moderate success, and dealt with her struggle with breast cancer.

She was married three times and had a daughter, Christina (born May 16, 1968) by her second marriage, to English actor David Cameron (1933-2012, not related to the current British prime minister).

This article uses material from the article Hildegard Knef from the free encyclopedia Wikipedia and it is licensed under the GNU Free Documentation License.

Good News From Fred Sauter, Joss & Bitterlin's Toy
Update Required To play the media you will need to either update your browser to a recent version or update your Flash plugin.