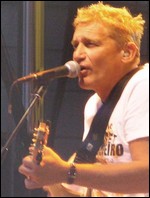 Rainhard Jürgen Fendrich (born 27 February 1955 in Vienna) is an Austrian singer, composer, entertainer, and actor. He is one of the most successful Austropop musicians, and his songs are written in Viennese German. He is very popular in Austria, but less so in other German-speaking countries. In non-German speaking countries he is little known. His song from 1990, "I am from Austria" (its lyrics, except for the title, are in Viennese German) is still popular in Austria.

Rainhard, called "Raini" by his friends, attended a Catholic boarding school. By his own admission he was a lazy pupil, and shy. He got his first guitar on his 15th birthday, and taught himself how to play it and started writing songs. He later began to study law, but soon gave up and took several jobs in order to finance his education as a professional actor and singer.

He has acted in the musicals Die Gräfin vom Naschmarkt (1980), Jesus Christ Superstar (Judas, 1982), Chicago (Billy Flynn, 1998), and he played Jeff Zodiak in the musical Wake Up, which he co-wrote with Harold Faltermeyer (and which failed) in 2002 (all of those in Vienna, Austria). He has also appeared in numerous Austrian and German movies.[1]

As an entertainer, he followed Rudi Carrell in the ARD TV-show Herzblatt, was the first host of Die Millionenshow (the Austrian version of Who Wants to Be a Millionaire) and for a while had his own TV comedy show, Nix Is Fix, produced by ORF and ARD.

Fendrich received the Austrian Golden Romy award for TV entertainment.[2] In 1994, 1995 and 2000, he was nominated for the Amadeus Austrian Music Award four times before winning it in 2002. Austrian "NEWS" magazine readers voted him "Best Entertainer of the Decade" in same year.

Besides working as a solo artist, he gathered, in 1997, the Austrian singer-guitarists (also his friends) Georg Danzer and Wolfgang Ambros for one single beneficial concert in favour of homeless people. Their success was overwhelming, and the three individualists showed up on stage as Austria3[3] from that day, until they decided to stop that project in 2006. However, at Georg Danzer's comeback concert in Vienna on 16 April 2007, they met again for a few songs, and even "thought" in public about re-uniting in 2008. This can not happen, as Danzer died of lung cancer on 21 June 2007.

The concert on Donauinselfest which Fendrich gave "instead and for Georg Danzer" who a few weeks before the event had to refuse because of his rapidly progressing disease, attracted 200.000 fans on 23 June 2007.[4]

This article uses material from the article Rainhard Fendrich from the free encyclopedia Wikipedia and it is licensed under the GNU Free Documentation License.