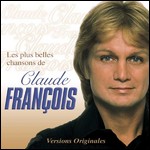 François sold some 70 million records during his career (and after his death) and was about to embark for the US when he was accidentally electrocuted in March 1978 at age 39.[1] Former French President Valéry Giscard d'Estaing is quoted as saying Claude François was, to him, "the French equivalent of The Beatles, meaning the great talent of a generation".[2][3]

The son of a French father and a Calabrian mother, François was born in Egypt, in the city of Ismaïlia, where his father, Aimé François (1908–1961), was working as a senior manager in the Anglo-French Suez canal company on the Suez Canal. In 1951, the job took the family to the city of Port Tewfik (now Suez Port).

The singer's full name was Claude Antoine Marie François. It was traditional in his father's family to give boys names that start with the letter A, but his mother managed to impose her will and named him "Claude." "Antoine" was then given as a middle name, and "Marie", the name of the Virgin Mary, was also given to protect the child. François had an older sister, Josette (born 1934), who wrote her memoirs in 2008.

François' mother, Lucia Mazzeï (1910–1992), also known as Chouffa, was very musical and had her son take piano and violin lessons. On his own, the boy learned to play the drums. As a result of the 1956 Suez Crisis, the family returned to live in Monaco, where they struggled financially after François' father fell ill and could not work. The family's expulsion from a wealthy life in Egypt was the first of the traumas that affected his whole life.

The young François found a job as a bank clerk and at night earned extra money playing drums with an orchestra at the luxury hotels along the French Riviera. With a good but untested nasal singing voice, he was offered a chance to sing at a hotel in the fashionable Mediterranean resort town of Juan-les-Pins. His show was well received and eventually he began to perform at the glamorous night-clubs along the Côte d'Azur. His father's decision to turn his back on his son when he became a musician in Monte Carlo in 1957 was the second trauma that affected the rest of his life. While working in a club, he met Janet Woollacott in 1959, an English dancer whom he married in 1960.

François moved to Paris, where there were many more opportunities to pursue his career. At the time, American rock and roll was taking hold in France and he took a job as part of a singing group to make a living. With the goal of eventually making it as a solo act, he paid the cost to record a 45rpm. Trying to capitalise on the American dance craze "The Twist", François recorded a song titled "Nabout Twist" that proved a resounding failure. Undaunted, in 1962 he recorded a cover version in French of an Everly Brothers song, "Made to Love" (aka "Girls Girls Girls"). Written by Phil Everly, it had been only a minor hit in America (Eddie Hodges took the song to number 14 in the Billboard charts in July 1962), but François' rendition titled "Belles Belles Belles" rocked to the top of the French charts, selling close to two million copies and making him an overnight star.

François' career continued to blossom under a new manager. In 1963 he followed the first success with another French adaptation of an American song, this time recording "If I Had a Hammer" and "Walk Right In" in French as "Si j'avais un marteau" and "Marche Tout Droit". François met Michel Bourdais who was working for the well-known French magazine Salut les Copains ("Hi Buddies"). He liked the rigour and the precision of Michel's drawings and asked him to draw his portrait. This drawing has remained very famous. Capitalizing on his blond good looks, he mimicked Elvis Presley's stage style as well as the slicked-back hair. Performing in sequined suits, François gave high-energy stage performances that had hordes of adoring teenage fans racing to the music shops to purchase his latest record or lining up to buy a ticket for his shows.

On 5 April 1963,[4] he headlined at the Paris Olympia, a sign that he had arrived. At the end of that year, François created original new dance steps, and Michel Bourdais drew them. For the first time, they brought up the idea of setting up a show with female dancers. In 1964 he began a relationship with a 17-year-old Eurovision-winning singer France Gall which lasted until 1967.

While returning from a trip to Las Vegas in January 1965, Francois, fascinated by the American shows, decided to take them as a model, and eventually the project of performing on the stage with a female dancer band became clear in his mind.

A dedicated professional, François worked hard to achieve success, producing a string of massively popular hit songs and touring constantly. With the onslaught of Beatlemania, he covered their hits in French, slightly adjusted the hairstyle, and kept his success moving ahead. His talent for kitsch extended beyond copying the works others had made famous, and he wrote songs for himself and displayed a melodic voice when singing romantic ballads.

In 1966, François created a complete new stage act using four female dancers as backup. Named "Les Claudettes," the sexy girls danced in the background while François did his own energetic work centre stage. In a return to the Paris Olympia he added eight musicians and a full orchestra to his backup dancers, putting on a spectacular show that filled every seat in the large theatre and left fans standing in the street for lack of tickets. Flushed with enormous success and confidence, he established his own record company.

In March 1967 he was finally divorced from Janet Woollacott, who had left him in 1962. This failed marriage was one of the three big traumas that affected his whole life. The relationship with France Gall ended in July 1967. After this François had an affair with singer Annie Phillippe who refused to marry him.

In 1967, he and Jacques Revaux wrote and composed a song in French called "Comme d'habitude" ("As Usual"), which became a hit in Francophone countries. Canadian singing star Paul Anka reworked it for the English-speaking public into the now legendary hit most famously sung by Frank Sinatra as "My Way".

François soon got consolation when he arranged a date with model Isabelle Forêt, whom he had first met a few years before. Their relationship lasted from 1967 to 1972 and produced two sons, Claude Jr. in July 1968 and Marc in November 1969. He hid the existence of his second son for five years because he thought that being a father of two would destroy his boyish image as "a free man and seducer".

He sang the original version of "Parce que je t'aime, mon enfant" ("Because I Love You My Child") in 1971; it remained relatively little-known in France but Elvis Presley covered it under the title "My Boy". Although François continued his successful formula of adapting English and American rock and roll hits for the French market, by the 1970s the market had changed and the disco craze that swept North America took root in France. This was no problem for the versatile François; he simply re-invented himself as the king of French disco, recording "La plus belle chose du monde", a French version of the Bee Gees' hit record, "Massachusetts".

Looking for new talent, he came across a singing family of two sisters and their cousins. These ladies became known as "Les Flêchettes" (named after "Flêche", the production label he owned). He produced a couple of albums for them before his death, and the ladies went on to sing for some of the major stars in European music.

He worked non-stop, touring across Europe, Africa and at major venues in Quebec in Canada. However, in 1971, his workload caught up with him when he collapsed on stage from exhaustion. After a brief period off, he returned to the recording studios, releasing several best-selling hits throughout the early 1970s. He expanded from owning his own record company to acquiring a celebrity magazine and a modelling agency. Although driven to achieve financial success, in 1974 he organised a concert to raise funds for a charity for handicapped children, and the following year he participated in a Paris concert to raise funds for medical research.

By 1972 he was single again, dating several well-known European stars. Finnish model Sofia Kiukkonen 1973–76 and American model Kathalyn (Kathleen) H. Jones-Mann 1976–78 were his most important relationships of this period. He also had an affair with his dresser Sylvie Mathurin 1974–78.

He continued to perform while overseeing his numerous business interests. In 1975, while in London, he narrowly escaped death when an IRA bomb exploded in the lobby of the Hilton hotel and two years later a fan tried to shoot him while he drove his car.[5] In 1977 and 1978, more than 15 years after his first hit record, he was still topping the musical charts with multi-million sales from hits such as "Alexandrie Alexandra" (which was released on the day of his burial) and performing to large audiences.

He performed an international career mostly in Belgium and Switzerland, but also in Italy, Spain, England and Canada. In 1976, his song "Le Telephone Pleure" ("Tears on the Telephone") reached No. 34 in the UK Top 40. On 16 January 1978, he performed, for the first time for a French singer, a gala at the Royal Albert Hall in London to an audience of 6000.

After working in Switzerland on 9 and 10 March and recording a television special for the BBC on Saturday, 11 March 1978, François returned to his Paris apartment, 46 Boulevard Exelmans, to appear, the next day, on Les Rendez-vous du Dimanche with TV host Michel Drucker. While taking a shower, he noticed that the light fixture was not straight on the wall; he tried to straighten it and was electrocuted.

His body was buried in the village of Dannemois, in the Essonne department (about 55 km (34 mi) south of Paris), near which François owned a house where he often spent time relaxing.

On 11 March 2000, the 22nd anniversary of his death, Place Claude-François in Paris was named in his memory; it is located right in front of the building where he died.

A biographical film called Cloclo (My Way internationally) was released in March 2012 to coincide with the anniversary of his death. It runs two and a half hours long and stars Jérémie Renier.

Claude François's sons, Claude Jr and Marc, have meticulously assumed the management of their father's artistic heritage over the years.

This article uses material from the article Claude François from the free encyclopedia Wikipedia and it is licensed under the GNU Free Documentation License.

Polka Dots And Moonbeams Daccordeon Quartet
Update Required To play the media you will need to either update your browser to a recent version or update your Flash plugin.