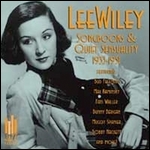 Wiley was born in Fort Gibson, Oklahoma.[1] While still in her early teens, she left home to pursue a singing career with the Leo Reisman band. Her career was temporarily interrupted by a fall while horseback riding. Wiley suffered temporary blindness, but recovered, and at the age of 19 was back with Reisman again, with whom she recorded three songs: "Take It From Me," "Time On My Hands," and her own composition, "Got The South In My Soul." She sang with Paul Whiteman and later, the Casa Loma Orchestra. A collaboration with composer Victor Young resulted in several songs for which Wiley wrote the lyrics, including "Got The South in My Soul" and "Anytime, Anyday, Anywhere," the latter an R&B hit in the 1950s.

During the early 1930s, Wiley recorded very little, and many sides were rejected:

In 1939, Wiley recorded eight Gershwin songs on 78s with a small group for Liberty Music Shops. The set sold well and was followed by 78s dedicated to the music of Cole Porter (1940) and Richard Rodgers & Lorenz Hart (1940 and 1954), Harold Arlen (1943), and 10" LPs dedicated to the music of Vincent Youmans and Irving Berlin (1951). The players on these recordings included Bunny Berigan, Bud Freeman, Max Kaminsky, Fats Waller, Billy Butterfield, Bobby Hackett, Eddie Condon, Stan Freeman, Cy Walter, and the bandleader Jess Stacy, to whom Wiley was married for a number of years. These influential albums launched the concept of a "songbook" (often featuring lesser-known songs), which was later widely imitated by other singers.

Wiley's career made a resurgence in 1950 with the much admired ten-inch album Night in Manhattan. In 1954, she opened the very first Newport Jazz Festival accompanied by Bobby Hackett. Later in the decade she recorded two of her finest albums, West of the Moon (1956) and A Touch of the Blues (1957). In the 1960s, Wiley retired, although she acted in a 1963 television film, Something About Lee Wiley, which told her life story. The film stimulated interest in the singer. Her last public appearance was a concert in Carnegie Hall in 1972 as part of the New York Jazz Festival, where she was enthusiastically received.

Wiley died on December 11, 1975 in New York City after being diagnosed with colon cancer earlier that year. She was 67 years old. She was survived by her second husband, Nat Tischenkel, whom she married in 1966.

This article uses material from the article Lee Wiley from the free encyclopedia Wikipedia and it is licensed under the GNU Free Documentation License.