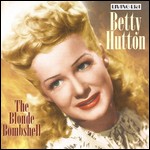 Hutton was born Elizabeth June Thornburg in Battle Creek, Michigan. She was the daughter of a railroad foreman, Percy E. Thornburg (1896-1939) and his wife, Mabel Lum (1901-1967).[2] While she was very young, her father abandoned the family for another woman. They did not hear of him again until they received a telegram in 1939, informing them of his suicide. Along with her older sister Marion, Betty was raised by her mother, who took the surname Hutton and was later billed as the actress Sissy Jones.

The three started singing in the family's speakeasy when Betty was 3 years old. Troubles with the police kept the family on the move. She attended Central High School in Lansing, Michigan. They eventually landed in Detroit, Michigan. (On one occasion, when Betty, preceded by a police escort, arrived at the premiere of Let's Dance (1950), her mother, arriving with her, quipped, "At least this time the police are in front of us!") Hutton sang in several local bands as a teenager, and at one point visited New York City hoping to perform on Broadway, where she was rejected.

A few years later, she was scouted by orchestra leader Vincent Lopez, who gave Hutton her entry into the entertainment business. In 1939 she appeared in several musical shorts for Warner Bros., and appeared in a supporting role on Broadway in Panama Hattie[3] (starring Ethel Merman) and Two for the Show,[4] both produced by Buddy DeSylva.

When DeSylva became a producer at Paramount Pictures, Hutton was signed to a featured role in The Fleet's In (1942), starring Paramount's number one female star Dorothy Lamour. Hutton was an instant hit with the movie-going public. Paramount did not immediately promote her to major stardom, however, but did give her second leads in a Mary Martin film musical, Star Spangled Rhythm (1943), and another Lamour film. In 1943 she was given co-star billing with Bob Hope in Let's Face It and with the release of The Miracle of Morgan's Creek the following year, Hutton attained major stardom. By the time Incendiary Blonde was released in 1945, she had supplanted Lamour as Paramount's number one female box office attraction.

Hutton made 19 films from 1942 to 1952 including the hugely popular The Perils of Pauline in 1947. She was billed above Fred Astaire in the 1950 musical Let's Dance. Hutton's greatest screen triumph came in Annie Get Your Gun (1950) for MGM, which hired her to replace an exhausted Judy Garland in the role of Annie Oakley. The film, with the leading role retooled for Hutton, was a smash hit, with the biggest critical praise going to Hutton. (Her obituary in The New York Times described her as "a brassy, energetic performer with a voice that could sound like a fire alarm.")[5] Among her lesser known roles was an unbilled cameo in Sailor Beware (1952) with Dean Martin and Jerry Lewis, in which she portrayed Dean's girlfriend, Hetty Button.

In 1944, she signed a recording contract with Capitol Records (she was one of the earliest artists to do so). Later she became disillusioned with Capitol's management and moved to RCA Victor.

Her career as a Hollywood star ended due to a contract dispute with Paramount following the Oscar-winning The Greatest Show on Earth (1952) and Somebody Loves Me (1952), a biography of singer Blossom Seeley. The New York Times reported that the dispute resulted from her insistence that her husband at the time, Charles O'Curran, direct her next film. When the studio declined, Hutton broke her contract. Hutton's last completed film was a small one, Spring Reunion, released in 1957, a drama in which she gave an understated, sensitive performance. Unfortunately, box office receipts indicated the public did not want to see a subdued Hutton.

Hutton got work in radio, appeared in Las Vegas and in nightclubs, then tried her luck in the new medium of television. In 1954, TV producer Max Liebman, of Your Show of Shows, fashioned his first "Color Spectacular" as an original musical written especially for Hutton, Satins and Spurs.[6] It was an enormous flop with the public and the critics, despite being one of the first programs televised nationally by NBC in compatible color. In 1957, she appeared on a Dinah Shore show on NBC that also featured Boris Karloff; the program has been preserved on a kinescope. Desilu Productions took a chance on Hutton in 1959, giving her a sitcom, The Betty Hutton Show, directed by Jerry Fielding.[7] It quickly faded.

Hutton began headlining in Las Vegas and touring across the country. She returned to Broadway briefly in 1964 when she temporarily replaced a hospitalized Carol Burnett in the show Fade Out Fade In.[8] In 1967 she was signed to star in two low-budget westerns for Paramount, but was fired shortly after the projects began. In the 1970s she portrayed Miss Hannigan in the original Broadway production of Annie while Alice Ghostley was on vacation.

Hutton's first marriage was to camera manufacturer Ted Briskin on September 3, 1945. The marriage ended in divorce in 1950. Two daughters were born to the couple

She married for the third time in 1955. Husband Alan W. Livingston, an executive with Capitol Records, was the creator of Bozo the Clown. They divorced five years later, although some accounts refer to the union as a nine-month marriage.

Her fourth and final marriage in 1960 was to jazz trumpeter Pete Candoli, a brother of Conte Candoli. Hutton and Candoli had one child

After the 1967 death of her mother in a house fire and the collapse of her last marriage, Hutton's depression and pill addictions escalated. She divorced her fourth husband, jazz trumpeter Pete Candoli, and declared bankruptcy. Hutton had a nervous breakdown and later attempted suicide after losing her singing voice in 1970. After regaining control of her life through rehab, and the mentorship of a Roman Catholic priest, Father Peter Maguire, Hutton converted to Roman Catholicism and took a job as a cook at a rectory in Portsmouth, Rhode Island. She made national headlines when it was revealed she was working in a rectory.

In 1974, a well-publicized "Love-In for Betty Hutton" was held at New York City's Riverboat Restaurant, emceed by comedian Joey Adams, with several old Hollywood pals on hand. The event raised $10,000 (USD) for Hutton and gave her spirits a big boost. Steady work, unfortunately, still eluded her.

Hutton appeared in an interview with Mike Douglas and a brief guest appearance in 1975 on Baretta. In 1977, Hutton was featured on The Phil Donahue Show. Hutton was then happily employed as hostess at a Newport, Rhode Island jai alai arena.

She also appeared on Good Morning America, which led to a 1978 televised reunion with her two daughters. Hutton began living in a shared home with her divorced daughter and grandchildren in California, but returned to the East Coast for a three-week return to the stage. She followed Dorothy Loudon as the evil Miss Hannigan in Annie on Broadway[9] in 1980. Hutton's rehearsal of the song "Little Girls" was featured on Good Morning America.

A ninth grade drop-out, Hutton went back to school and earned a Master's Degree in psychology from Salve Regina University. During her time at college, Hutton became friends with Kristin Hersh and attended several early Throwing Muses concerts.[10] Hersh would later write the song "Elizabeth June" as a tribute to her friend, and wrote about their relationship in further detail in her memoir, Rat Girl.[11]

Her last known performance, in any medium, was on Jukebox Saturday Night, which aired on PBS in 1983.[12] Hutton stayed in New England and began teaching comedic acting at Boston's Emerson College. She became estranged again from her daughters.

After the death of her ally, Father Maguire, Hutton returned to California, moving to Palm Springs in 1999, after decades in New England. Hutton hoped to grow closer with her daughters and grandchildren, as she told Robert Osborne on TCM's Private Screenings in April 2000, though her children remained distant. She told Osborne that she understood their hesitancy to accept a now elderly mother. The TCM interview first aired on July 18, 2000. The program was rerun as a memorial on the evening of her death in 2007, and again on July 11, 2008, April 14, 2009, and as recently as January 26, 2010.[13]

Hutton lived in Palm Springs, California until her death, at 86, from colon cancer complications.[5][14] Hutton is buried at Desert Memorial Park[15] in Cathedral City, California. None of her three daughters attended the funeral.[16]

For her contribution to the motion picture industry, Betty Hutton has a star on the Hollywood Walk of Fame located at 6253 Hollywood Boulevard.

This article uses material from the article Betty Hutton from the free encyclopedia Wikipedia and it is licensed under the GNU Free Documentation License.

If I Were A Bell Nicole Herzog & Stewy von Wattenwyl Group
Update Required To play the media you will need to either update your browser to a recent version or update your Flash plugin.