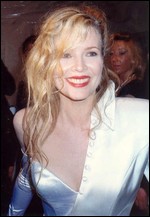 She is known for her portrayals of Domino Petachi, the Bond girl in Never Say Never Again (1983), and Vicki Vale, the female lead in Batman (1989). Basinger received a Golden Globe Award for Best Supporting Actress Motion Picture nomination for her work in The Natural (1984). She won an Academy Award, Golden Globe, and Screen Actors Guild Award for Best Supporting Actress for her performance in L.A. Confidential (1997). Basinger also acted in the movies 9½ Weeks (1986) and 8 Mile (2002).

Basinger was born in Athens, Georgia. Her father, Donald Wade Basinger, was a big band musician and loan manager who as a U.S. Army soldier landed in Normandy on D-Day (June 6, 1944).[1] Her mother, Ann (née Cordell), was a model, an actress, and a swimmer who appeared in several Esther Williams films.[2][3] The third of five children, she has two brothers, Mick and Skip, and two sisters, Ashley and Barbara. Basinger's ancestry includes German, Swedish, and Cherokee Indian,[4] and she was raised a Methodist.[5]

She spent most of her childhood studying ballet from about the time she was three to her mid-teens. When Basinger was 16, she started modeling by winning the Athens Junior Miss contest. She then won the title Junior Miss Georgia. She competed in the national Junior Miss pageant and was offered a modeling contract with Ford Modeling Agency. She turned it down in favor of singing and acting, but reconsidered and went to New York to become a Ford model.

Not long after the Ford deal, Basinger was on the cover of magazines. She appeared in hundreds of ads throughout the early 1970s, most notably as the Breck Shampoo girl. She alternated between modeling and attending acting classes at the Neighborhood Playhouse as well as performing in Greenwich Village clubs.

In 1976, after five years as a cover girl, Basinger moved to Los Angeles to act. After guest roles on TV shows such as Starsky and Hutch and Charlie's Angels in 1976, and a starring role on the short-lived series Dog and Cat (1977), her first feature-length role was in a made-for-TV movie, Katie: Portrait of a Centerfold (1978) in which she played a smalltown young woman who goes to Hollywood to become an actress and winds up a famous centerfold for a men's magazine. She was then cast as a prostitute in From Here to Eternity (1979), in which she starred alongside Natalie Wood. Basinger played the same character in a 13-episode TV spinoff in 1980. She made her theatrical film debut in Hard Country (1981) with Jan Michael Vincent, followed by Mother Lode (1982) with Charlton Heston.

Basinger's breakout role was as Bond girl Domino Petachi in Never Say Never Again (1983), starring opposite Sean Connery. She posed nude for Playboy to promote the film. Basinger said Playboy led to opportunities such as Barry Levinson's The Natural (1984), co-starring Robert Redford, for which she earned a Golden Globe nomination as Best Supporting Actress. She starred opposite Mickey Rourke in the sexually provocative 9½ Weeks (1986). Oscar-winning writer-director Robert Benton cast her in the title role for the film Nadine (1987) with Jeff Bridges. Basinger played Vicki Vale in the 1989 blockbuster Batman, directed by Tim Burton.

Directors repeated her in their films, such as Blake Edwards for The Man Who Loved Women (1983) and Blind Date (1987), as well as Robert Altman for Fool for Love (1985) and Prêt-à-Porter (1994). In 1992, Basinger was guest vocalist on a re-recorded version of Was (Not Was)'s "Shake Your Head", which also featured Ozzy Osbourne on vocals, and reached the UK Top 5.[6] In the video for Tom Petty's 1993 song "Mary Jane's Last Dance", Basinger played the unconscious woman whom Petty brings home from the morgue for dinner, dressing her in a wedding gown. Later, Petty is shown throwing her into the sea. In a macabre ending, she floats with her eyes open.

Basinger acted less in the 1990s to take care of her family. She made a comeback in 1997 as the femme fatale in the neo-noir L.A. Confidential, co-starring Russell Crowe. This earned her an Academy Award for Best Supporting Actress, as well as the Golden Globe and Screen Actor's Guild Award. The film's director, Curtis Hanson, cast her once more as Eminem's mother in 8 Mile (2002). She appeared mostly in television and independent films such as While She Was Out, The Burning Plain,[7] and Lifetime's The Mermaid Chair. She was also seen in the mainstream thrillers Cellular (2004) and The Sentinel (2006), and The Informers (2009).

In the 1970s, Basinger lived with model Dale Robinette.[8]

On October 12, 1980, Basinger married makeup artist Ron Snyder-Britton (born 1938), who worked on the crew of her film Hard Country. The marriage ended in divorce in 1988. He later wrote a memoir, Longer than Forever: The Story of Our Strange Marriage, in 1998, about their time together and her rumored affair with actor Richard Gere, with whom she starred in No Mercy (1986) and Final Analysis (1992).[9]

In 1990, she met her second husband, Alec Baldwin, when they played lovers in The Marrying Man. They married on 19 August 1993 and appeared in the remake of The Getaway (1994). They played themselves in a 1998 episode of The Simpsons (which includes Ron Howard), in which Basinger corrects Homer Simpson on the pronunciation of her last name and polishes her Oscar statuette. Basinger and Baldwin have a daughter, Ireland Eliesse Baldwin (born 23 October 1995).

They filed for divorce in January 2001; it was finalized in February 2002. Since then, the couple have been in a contentious custody battle. Alec Baldwin's book A Promise To Ourselves[10] chronicles the lengths Basinger has gone to deny Baldwin access to their daughter since separation.

Some family members recommended Basinger buy the small town of Braselton, Georgia in 1989 for US$20 million, to establish as a tourist attraction with movie studios and film festival, but she met financial difficulties and sold it in 1993. The town is now owned by developer Wayne Mason. In a 1998 interview with Barbara Walters Basinger admitted that "nothing good came out of it" because a rift resulted within her family. Her financial difficulties were exacerbated when she pulled out of the controversial film Boxing Helena, resulting in the studio's winning an US$8-million judgment against her. Basinger filed for bankruptcy [11] and appealed the jury's decision to a higher court, which sided with her. She and the studio settled for a lesser amount.[12]

Basinger is a vegan animal rights supporter. She has posed for anti-fur advertisements by PETA.[13] She has written to fashion designers such as Yohji Yamamoto to ask that they stop using fur.[14]

This article uses material from the article Kim Basinger from the free encyclopedia Wikipedia and it is licensed under the GNU Free Documentation License.

My One And Only Love Huub Jacobs' Midnight Mainstream & Anny Weiler
Update Required To play the media you will need to either update your browser to a recent version or update your Flash plugin.