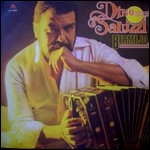 Timoteo "Dino" Saluzzi (born May 20, 1935 Campo Santo, Salta Province, Argentina) is an Argentinian bandoneon player. He is the son of Cayetano Saluzzi[1] and the father of guitarist José Maria Saluzzi.[2]

Dino played the bandoneón since his childhood. Other than his father, he was influenced by Salta musicians such as Cuchi Leguizamón, and by the lyrical strain of the tango of Francisco de Caro and Agustin Bardi. Dino described the vividness of his musical sketches as "an imaginary return" to the little towns and villages of his childhood.

For much of his youth, Saluzzi lived in Buenos Aires, playing with the Radio El Mundo orchestra.[1] He would play in orchestras for a living, while touring with smaller, sometimes jazz-oriented ensembles, developing a personal style that made him a leading bandoneonist in Argentine folklore and avant-garde music (especially since Astor Piazzolla did not participate in projects other than his own). His record career doesn't start until the 70s, along with Gato Barbieri, when he signed a couple of crazy lyricism albums under the name of Gaucho. Over this decade, he worked on many tours in South America and specially in Japan, but always associated to other names, as Mariano Mores or Enrique Mario Franchini.

Through word-of mouth publicity (mostly from expatriate musicians) he was invited to several European music festivals, and landed a contract with the ECM label. Several records have resulted, including Kultrum, 1982. From the beginning of the 1980s onwards, there were collaborations with European and American jazz musicians including Charlie Haden, Tomasz Stanko, Charlie Mariano, Palle Danielsson, and Al Di Meola.

ECM brought Saluzzi together with Charlie Haden, Palle Mikkelborg and Pierre Favre for Once Upon A Time ... Far Away In The South, and subsequently with Enrico Rava for Volver. Rava had worked extensively in Argentina, and Haden's sympathy for Latin American music was well-known; furthermore Palle Mikkelborg and Dino Saluzzi had worked together productively in George Gruntz's band: there was a common ground on which an artistic exchange of ideas could take place. Saluzzi later played with 'Haden's Liberation Music Orchestra', and the 'Rava Saluzzi Quintet' also toured.

In 1991, Saluzzi recorded an album with his brothers Felix and Celso and his son José María on guitar, kicking off his "family project", which has since toured many countries. Mojotoro drew upon the full range of South American musics: tango, folk, candina music, candombe, the milonga music of the la Pampa province...

Anja Lechner and Dino have toured widely as a duo, too and US jazz magazine "Down Beat" declares the album that recorded together, Ojos Negros album of the year (best of 2007 list).

With Giya Kancheli in quartet including Gidon Kremer and Andrei Pushkarev

This article uses material from the article Dino Saluzzi from the free encyclopedia Wikipedia and it is licensed under the GNU Free Documentation License.

Hermit Blues Chris Conz Trio
Update Required To play the media you will need to either update your browser to a recent version or update your Flash plugin.