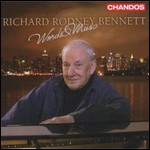 Bennett was born at Broadstairs, Kent, but was raised in Devon during World War II.[1] His mother, Joan Esther (Spink), was a pianist who had trained with Gustav Holst and sang in the first professional performance of The Planets.[2][3] His father, Rodney Bennett, (1890–1948) was a children's book author and poet, who worked with Roger Quilter on his theatre works and provided new words for some of the numbers in the Arnold Book of Old Songs.

Bennett was a pupil at Leighton Park School.[4] He later studied at the Royal Academy of Music with Howard Ferguson, Lennox Berkeley and Cornelius Cardew. Ferguson regarded him as extraordinarily brilliant, having perhaps the greatest talent of any British composer in his generation, though lacking in a personal style. During this time, Bennett attended some of the Darmstadt summer courses in 1955, where he was exposed to serialism. He later spent two years in Paris as a student of the prominent serialist Pierre Boulez between 1957 and 1959.[5] He always used both his first names after finding another Richard Bennett active in music.

Bennett produced over two hundred works for the concert hall, and fifty scores for film and television. He was also a writer and performer of jazz songs for fifty years. Immersed in the techniques of the European avant-garde via his contact with Boulez, Bennett subsequently developed his own dramato-abstract style. In his later years, he adopted an increasingly tonal idiom.

Bennett regularly performed as a jazz pianist, with such singers as Cleo Laine, Marion Montgomery (until her death in 2002), Mary Cleere Haran (until her death in 2011), and more recently with Claire Martin,[4] performing the Great American Songbook. Bennett and Martin performed at such venues as The Oak Room at The Algonquin in New York (which closed in 2012), and The Pheasantry and Ronnie Scott's in London.

In later years, in addition to his musical activities, Bennett became known as an artist working in the medium of collage.[7] He exhibited these collages several times in England, including at the Holt Festival, Norfolk[8] in 2011, and at the Swaledale Festival, Yorkshire, in 2012.[9] The first ever exhibition of his collages was in London in 2010, at the South Kensington and Chelsea Mental Health Centre, curated by the Nightingale Project, a charity that takes music and art into hospitals. Bennett was a patron of this charity.[10] Bennett is honoured with four photographic portraits in the collection of the National Portrait Gallery, London.

Anthony Meredith's biography of Bennett was published in November 2010.[11] Bennett is survived by his sister Meg (born 1930), the poet M. R. Peacocke, with whom he collaborated on a number of vocal works.

Despite his early studies in modernist techniques, Bennett's tastes were catholic. He wrote in a wide range of styles, including jazz, for which he had a particular fondness. Early on, he began to write music for feature films. He said that it was as if the different styles of music that he was writing went on 'in different rooms, albeit in the same house'.[7] Later in his career the different aspects all became equally celebrated – for example in his 75th birthday year (2011), there were numerous concerts featuring all the different strands of his work. At the BBC Proms for example his Murder on the Orient Express Suite was performed in a concert of film music, and in the same season his Dream Dancing and Jazz Calendar were also featured. Also at the Wigmore Hall, London, on 23 March 2011 (a few days before Bennett's 75th birthday), a double concert took place in which his Debussy-inspired piece Sonata After Syrinx was performed in the first concert, and in the Late Night Jazz Event which followed, Bennett and Claire Martin performed his arrangements of the Great American Songbook (Cole Porter, George Gershwin, Rodgers and Hammerstein and so on). See also Tom Service's appreciation of Bennett's music published in The Guardian in July 2012.[13]

He wrote music for films and television; among his scores were the Doctor Who story The Aztecs (1964) for television, and the feature films Billion Dollar Brain (1967), Lady Caroline Lamb (1972) and Equus (1977). His scores for Far from the Madding Crowd (1967), Nicholas and Alexandra (1971), and Murder on the Orient Express (1974), each earned him Academy Award nominations, with Murder on the Orient Express gaining a BAFTA award. Later works include Enchanted April (1992), Four Weddings and a Funeral (1994), and The Tale of Sweeney Todd (1998). He was also a prolific composer of orchestral works, piano solos, choral works and operas. Despite this eclecticism, Bennett's music rarely involved stylistic crossover.

This article uses material from the article Richard Rodney Bennett from the free encyclopedia Wikipedia and it is licensed under the GNU Free Documentation License.

Fruits Of Labour Greasy
Update Required To play the media you will need to either update your browser to a recent version or update your Flash plugin.