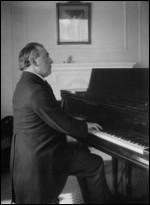 Born to an itinerant Jewish musician in Podgórze near Kraków, Ignaz Friedman was a child prodigy. He studied with Hugo Riemann in Leipzig and Theodor Leschetizky in Vienna, and participated in Ferruccio Busoni's masterclasses.

His official début in Vienna in 1904 featured a program of three piano concertos, rivaling the similar programs of established titans like Busoni and Godowsky, and he remained a titan throughout his career. His style was quiet and effortless, imbued with a sense of rhythm and color, grounded in a sovereign technique, and much has been written about his peerless interpretations of Chopin in particular.

As with his compatriot and contemporary Moriz Rosenthal, Friedman's Chopin interpretations, particularly those of the mazurkas, are considered by many to be unsurpassed. Despite having given 2,800 concerts during his career, he sometimes received lukewarm reviews in America in later years, as younger critics were becoming accustomed to modernist playing which stripped romantic interpretation of its agogics and essence. (Rachmaninoff admired Friedman's playing but may have opined that he "played too much to the gallery.")[2]

At the outbreak of the Second World War, Friedman was in Europe, but managed to escape when a concert tour in Australia was offered at the last moment. He settled in Sydney and remained there until his death (which occurred on Australia Day, 1948). His last concert was in Sydney on July 24, 1943,[3] after which neuritis in his left hand forced him to retire from the concert platform.

Friedman's relatively few recordings, which have been collected by Naxos Records on five CDs, are widely admired, particularly his Chopin and his nine Songs Without Words by Mendelssohn. Like most of the great artists of his time who broadcast, much of his recorded material has been lost, including hours of radio recordings made in Australia and New Zealand.

He composed more than 90 works, mainly piano miniatures, as well as pieces for cello and a piano quintet, but his compositions have not found a niche in the standard repertory. He arranged many works, especially those of J. S. Bach and Domenico Scarlatti.

He edited an almost complete edition of the piano works of Chopin and also produced editions of Schumann and Liszt.

The Sydney Conservatorium of Music awards an annual Ignaz Friedman Prize for composition.[4]

This article uses material from the article Ignaz Friedman from the free encyclopedia Wikipedia and it is licensed under the GNU Free Documentation License.