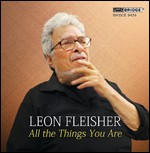 Leon Fleisher (born July 23, 1928) is an American pianist and conductor.

Fleisher was born in San Francisco into a poor Jewish family, to immigrant parents from Eastern Europe.[1] His father's business was hat-making, while his mother's goal was to "make her son a great concert pianist".[2] Fleisher started studying the piano at age four. He made his public debut at age eight and played with the New York Philharmonic under Pierre Monteux at 16; Monteux famously called him "the pianistic find of the century." He became one of the few child prodigies to be accepted for study with Artur Schnabel and also studied with Maria Curcio.[3][4] Fleisher was linked via Schnabel to a tradition that descended directly from Beethoven himself, handed down through Carl Czerny and Theodor Leschetizky.

In the 1950s, Fleisher signed an exclusive recording contract with Columbia Masterworks. He is particularly well known for his interpretations of the piano concerti of Brahms and Beethoven, which he recorded with George Szell and the Cleveland Orchestra. They also recorded Mozart's Piano Concerto No. 25, the Grieg and Schumann piano concertos, Franck's Symphonic Variations, and Rachmaninoff's Rhapsody on a Theme of Paganini.

In 1964, Fleisher lost the use of his right hand, due to a condition that was eventually diagnosed as focal dystonia. Fleisher commenced performing and recording the left-handed repertoire while searching for a cure for his condition. In addition, he undertook conducting during this time, serving at one time as Music Director of the Annapolis Symphony Orchestra in Maryland. In the 1990s, Fleisher was able to ameliorate his focal dystonia symptoms after experimental botox injections to the point where he could play with both hands again.[5]

In 2004, Vanguard Classics released Leon Fleisher's first "two-handed" recording since the 1960s, entitled "Two Hands", to critical acclaim. Two Hands is also the title of a short documentary on Fleisher by Nathaniel Kahn which was nominated for an Academy Award for best short subject on January 23, 2007. Fleisher received the 2007 Kennedy Center Honors. Kennedy Center Chairman Stephen A. Schwarzman described him as "a consummate musician whose career is a moving testament to the life-affirming power of art."

Fleisher's musical interests extend beyond the central German Classic-Romantic repertory. The American composer William Bolcom composed his Concerto for Two Pianos, Left Hand for Fleisher and his close friend Gary Graffman, who has also suffered from debilitating problems with his right hand. It received its first performance in Baltimore in April 1996. The concerto is so constructed that it can be performed in one of three ways, with either piano part alone with reduced orchestra, or with both piano parts and the two reduced orchestras combined into a full orchestra.

In 2004, Leon Fleisher played the world premiere of Paul Hindemith's Klaviermusik (Piano Concerto for the Left Hand), Op. 29, with the Berlin Philharmonic. This work was written in 1923, for Paul Wittgenstein, who disliked and refused to play it. However, he had sole performing rights and kept the score, not allowing any other pianists to play it. The manuscript was discovered among his papers after the death of his widow in 2002. On October 2, 2005, Fleisher played the American premiere of the work, with the San Francisco Symphony under Herbert Blomstedt.[6]

In 2012, at the invitation of Justice Ruth Bader Ginsburg, Fleisher performed at the Supreme Court of the United States.[7]

He has continued to be involved in music, both conducting and teaching at the Peabody Conservatory of Music, the Curtis Institute of Music, and the Royal Conservatory of Music in Toronto; he is also closely associated with the Tanglewood Music Center. With Dina Koston, he co-founded and co-directed the Theater Chamber Players in 1968–2003, which was the first resident chamber ensemble of the Smithsonian Institution and of The Kennedy Center.[8]

Fellow of the American Academy of Arts and Sciences

"Instrumentalist of the Year", Musical America (1994)

Honorary doctorates from Towson State University, The Boston Conservatory, University of Cincinnati and the Cleveland Institute of Music

This article uses material from the article Leon Fleisher from the free encyclopedia Wikipedia and it is licensed under the GNU Free Documentation License.

It Don't Mean A Thing Sunny Side Swingers 2008
Update Required To play the media you will need to either update your browser to a recent version or update your Flash plugin.