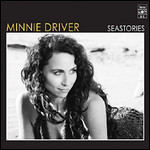 Amelia Fiona "Minnie" Driver (born 31 January 1970) is an English[1][2] actress and singer-songwriter. She was nominated for an Academy Award for Best Supporting Actress for her performance in the film Good Will Hunting, and an Emmy Award and a Golden Globe for her work in the television series The Riches.

Driver was born in London,[3] the daughter of Gaynor Churchward (née Millington), a designer and former couture model, and Ronnie Driver, a Yorkshire businessman and financial adviser from Swansea.[1][4][5] Ronnie Driver was acknowledged as a war hero and awarded the Distinguished Flying Medal for bravery shown as a gunner in an RAF Wellington bomber during the Battle of Heligoland Bight in 1939 when his aircraft was shot down.[6] Minnie Driver was brought up in Barbados and was educated at Bedales and the Webber Douglas Academy of Dramatic Art.[7] Driver has English, Italian, Irish, Scottish, German and French ancestry.[1][2]

Driver's television debut was in a 1991 UK TV advertisement for Right Guard deodorant.[8] Driver also made her stage debut in 1991,[9] supplementing her income by performing as a jazz vocalist and guitarist.[10] She appeared on British television with comedians such as Steve Coogan and Armando Iannucci and had small parts in such shows as Casualty, The House of Eliott, Lovejoy, and Peak Practice. Driver first came to broad public attention when she played the lead role in Circle of Friends in 1995. She followed this with a string of supporting roles in big studio films like the 17th James Bond installment GoldenEye (1995), Sleepers (1996), and Grosse Pointe Blank (1997). She achieved greater recognition playing opposite Matt Damon in Gus Van Sant's Good Will Hunting (1997), a role for which she was nominated for an Academy Award for Best Supporting Actress and a Screen Actors Guild Award, among others. In 2003 and 2004, she had a noted recurring role on Will & Grace as Lorraine Finster, the nemesis of Karen Walker (Megan Mullally) and daughter of Karen's lover, Lyle Finster (John Cleese). Driver has also worked on several animated features, voicing Jane in Disney's 1999 version of Tarzan, and Lady Eboshi in the 1999 English dubbed release of the Japanese film Princess Mononoke.

On 12 March 2007, Driver made her return to television starring alongside Eddie Izzard on the FX Network show The Riches, a series about a family of Travellers living in an upscale gated community in the suburbs. She was nominated for an Emmy Award[11] and a Golden Globe Award as Best Lead Actress in a Drama Series in 2007 and 2008, respectively.[12]

Driver guest-starred in the January 2010 episode of Modern Family entitled "Moon Landing". Her role was that of Claire's friend and former co-worker whom she hasn't seen in years.[13] She also starred alongside James Nesbitt and Goran Visnjic in the British series The Deep, which was shown on BBC One over the summer of 2010.[14]

In 2010, Driver appeared in Conviction, a film depicting the real-life story of Betty Ann Waters (Hilary Swank), a single mother who spends a decade pursuing a law degree so she can represent her wrongfully convicted brother (played by Sam Rockwell) at court. Driver plays a fellow law student and friend of Swank's character who helps her with the case. The film received generally positive reviews according to the review aggregate Rotten Tomatoes listing an average score of 6.3/10 and a 68% of approval from critics.[15] Also in 2010, Driver starred alongside Paul Giamatti in the comedy-drama Barney's Version. According to Rotten Tomatoes, the film received an 80% of positive reviews from critics[16] and Driver herself went on to win a Genie Award for Best Supporting Actress.[16]

Early in her career, Driver was a member of a band called "Puff, Rocks and Brown"; the band was signed to a development deal with Island Records, which ended without a release.[17]

She began a low-profile return to music in 2000; the following year, she signed with EMI and Rounder Records and performed at SXSW.[18] Canadian music producer Colin Craig assisted in the eventual release of Everything I've Got in My Pocket, which reached No. 34[19] in the UK, and a second single, "Invisible Girl" peaking at No. 68. The album was backed by a group including members of the Wallflowers and Pete Yorn's band. Driver wrote 10 of the 11 songs on the album and also covered "Hungry Heart" from Bruce Springsteen's The River. In 2004, Driver was the support act for the Finn Brothers on the UK portion of their world tour.[20]

In 2004, Driver played Carlotta Giudicelli in Joel Schumacher's film of The Phantom of the Opera. Because of the vocal requirements of the role, Driver was the sole cast member to have her voice dubbed. However, she did lend her own voice to Learn to be Lonely, a song written by Andrew Lloyd Webber specifically for the film version of his musical (it plays over the closing credits of the movie). Driver released her second album entitled Seastories on 17 July 2007. The 12-track set is produced by Marc "Doc" Dauer, who also produced Everything I've Got in My Pocket. Ryan Adams and his band the Cardinals and Liz Phair are among the list of collaborators for the album.[21]

On 5 September 2008, Driver gave birth to a son, Henry Story Driver but she did not reveal the identity of the father at that time.[22] In February 2012, she revealed that her son's father was a writer on her television show The Riches.[23] Driver dated Good Will Hunting co-star Matt Damon[24] in a high profile celebrity relationship under intense media scrutiny. She was once engaged to Josh Brolin, but the pair amicably split.[25]

This article uses material from the article Minnie Driver from the free encyclopedia Wikipedia and it is licensed under the GNU Free Documentation License.