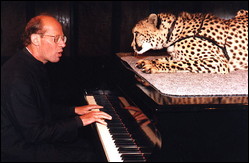 David Helfgott (born 19 May 1947) is an Australian concert pianist. Helfgott's life inspired the Oscar-winning film Shine, in which he was played by Geoffrey Rush.

Helfgott was born in Melbourne to Polish Jewish parents. He became known as a child prodigy after his father started teaching him the piano when he was five. When he was ten years old he studied under Frank Arndt, a Perth piano teacher, and won several local competitionssometimes alone and sometimes with his elder sister Margaret.

At the age of fourteen while studying at Mount Lawley Senior High School, people such as Perth composer James Penberthy and writer Katharine Susannah Prichard raised money to enable him to go to the United States to study music. However, his father denied him permission on the grounds that he was not ready for independence. From age 17 he studied with Alice Carrard, a former student of Béla Bartók and István Thomán. He won the state final of the ABC Instrumental and Vocal Competition six times.[1]

At the age of nineteen, Helfgott won a scholarship to study at the Royal College of Music in London, where he studied under the pianist Cyril Smith for three years. The awards he won at the RCM included the Dannreuther Prize for Best Concerto Performance for his performance of Rachmaninoff's Piano Concerto No. 3, and the Marmaduke Barton Prize.[1]

During his time in London he began showing more definite manifestations of schizoaffective disorder. He returned to Perth in 1970. The following year he married Clare Papp, an older woman with four children.[2] He worked as a rehearsal pianist for the Western Australian Opera Company[2] and also took part in several ABC concerts. After his brief marriage broke down he was institutionalised in Graylands, a Perth mental hospital. Over the next ten years, he underwent psychiatric treatment which included psychotropic medication and electroconvulsive therapy.

In 1983 his brother Les Helfgott found him work at a Perth wine bar called Riccardo's.[2] In 1984, at Riccardo's, Helfgott met Gillian Murray, an astrologer. They married later that year.

Helfgott was the subject of the 1996 film Shine, which dealt with the pianist's formative years and struggle with mental illness. Helfgott was portrayed by actors Geoffrey Rush (adult), Noah Taylor (teenager) and Alex Rafalowicz (child). The film has come in for strong criticism from Helfgott's sister for a range of alleged inaccuracies, particularly for the portrayal of his father as a violent and tyrannical despot.

Helfgott generally prefers to perform Romantic music, mostly Mussorgsky, Rachmaninoff, Chopin, Liszt, Schumann and Rimsky-Korsakov. However, his recordings and performances, especially that of Rachmaninoff's Piano Concerto No. 3, have been criticized as "pallid, erratic and incoherent."[3] Of the two commercial recordings released by RCA, the American journal Fanfare Magazine was critical not only of Helfgott himself, but also of his producers, who were "marketing Helfgott's pain."[4] The British magazine Gramophone was similarly scathing about the exploitative nature of their issue, which, the magazine said, marketed Helfgott as an "unsung genius" when it was obvious from the recordings that he was not.[5][6]

On stage, Helfgott is known for his unusual platform manner. In 1997, critic Anthony Tommasini noted that Helfgott "stares into the hall and renders a nonstop commentary of grunts, groans and mutterings".[7]

In December 1999, Helfgott was the opener for the "Geniuses, Savants and Prodigies" conference of Allan Snyder's Centre for the Mind.

Also in 1999, Helfgott appeared on the rock group Silverchair's album Neon Ballroom (on the opening track, Emotion Sickness). Ben Gillies, the drummer of Silverchair, described Helfgott's adding of the brilliant and difficult piano track to the song, as one of the greatest things he'd seen a musician do. The piano arrangement was made by Larry Muhoberac.

Helfgott tours Australia annually and plays a small number of recitals in other countries.[1]

Helfgott and his second wife, Gillian, live in The Promised Land, a valley near Bellingen in New South Wales.[1]

When not at the piano his other interests include reading, watching television, listening to music (preferably all at the same time), cats, chess, philosophy, swimming and keeping fit. A former cigarette smoker, Helfgott quit many years ago due to the influence of his first wife.

This article uses material from the article David Helfgott from the free encyclopedia Wikipedia and it is licensed under the GNU Free Documentation License.