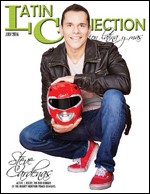 Cardenas was born at Langley Air Force Base, in Hampton, Virginia, but was raised in San Antonio, Texas. He is of half Mexican descent.[1] He started training in martial arts when he was about 12 years old and reached black belt in tae kwon do at age 16.

His character, Rocky, replaced Jason Lee Scott (played by Austin St. John) as the Red Ranger in the Mighty Morphin Power Rangers TV series, and he later became the Blue Ranger for Power Rangers Zeo. He had no previous acting experience and had to learn on the job. Cardenas left the Power Rangers series after Zeo, in order to focus on his karate school and other disagreements. Many years later, starting at the 2007 Power Morphicon convention, he began making convention appearances with other former cast members.[2] He has since appeared at Anime Expo 2009 and Power Morphicon 2010.

After Power Rangers, he ran martial arts studios in California and Texas. In 2009, he started a kids-specific program at Hollywood Brazilian Jiu-Jitsu studio in West Hollywood, and in 2011 he opened the Force/Balance Brazilian Jiu-Jitsu & Yoga school. Cardenas had become interested in Brazilian jiu-jitsu after losing a friendly match against "a blue belt in BJJ... [he] choked me out in 10 seconds! He was only training for a year and a half at that time and I had been training for 10 yrs. It was an immediate eye opener." The style was more difficult for him to learn than other martial arts disciplines[3]

This article uses material from the article Steve Cardenas from the free encyclopedia Wikipedia and it is licensed under the GNU Free Documentation License.

Harlem Nocturne Ellingtonality
Update Required To play the media you will need to either update your browser to a recent version or update your Flash plugin.