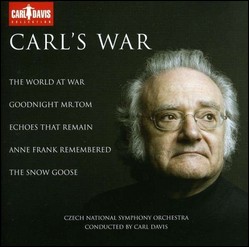 Davis is a conductor with the London Philharmonic Orchestra, and regularly conducts the Royal Liverpool Philharmonic Orchestra. He has written music for more than 100 television programmes, but is best known for creating music to accompany silent films. Davis also collaborated with Paul McCartney in the creation of the Liverpool Oratorio. Davis's music is published by Faber Music.

Born in New York in 1936, he studied composition with Paul Nordoff and Hugo Kauder, and subsequently with Per Nørgaard in Copenhagen. His early work in the USA provided valuable conducting experience with organisations such as New York City Opera and the Robert Shaw Chorale. In 1959 the revue Diversions, of which he was co-author, won an off-Broadway Emmy and subsequently travelled to the 1961 Edinburgh Festival. As a direct result of its success there, Davis was commissioned by Ned Sherrin to write music for That Was The Week That Was. Other radio and TV commissions followed and Davis's UK career was launched.[2]

He also worked for television producer Jeremy Isaacs in providing the theme music for the history documentary series The World at War (1973) for Thames Television and Cold War (1998).

Davis conducted the BBC's theme song for their coverage of the 2006 FIFA World Cup, adapted from George Handel's "See the Conquering Hero Comes".

He has written a number of film scores including The French Lieutenant's Woman (1981), for which Davis won the BAFTA Award for Best Film Music, Champions (1983), Widows' Peak (1994), Anne Frank Remembered (1995), and The Great Gatsby (2000). He also worked for television, such as the soundtrack and album for the Upstairs Downstairs (2010 TV series).

In 1980 Davis was commissioned by documentarians Kevin Brownlow and David Gill to create music for Thames Television's Hollywood: A Celebration of the American Silent Film. His association with them continued the same year with Abel Gance's epic silent film Napoléon (1927), which was restored and expanded with Davis' music for cinematic release.[3] In March 2012, Davis conducted the Oakland East Bay Symphony performing his score for the complete Brownlow restoration in a presentation by the San Francisco Silent Film Festival at the Paramount Theatre Oakland.[4][5][6][7] There was a similar treatment for D. W. Griffith's Intolerance: Love's Struggle Through The Ages (1916). This had orchestral music originally, but Davis's new score was used instead in 1989.

The Hollywood documentary series was followed by the documentaries Unknown Chaplin in 1982, Buster Keaton: A Hard Act to Follow (cf Buster Keaton) in 1987 and Harold Lloyd: The Third Genius (cf Harold Lloyd) in 1989. In the 1980s and 1990s, Davis wrote and conducted the scores for numerous classic silent films released restored and released through Brownlow and Gill's Thames Silents series in the UK.

By 1993, his reputation made him the number one choice for new scores to silent films. Many DVD releases, including Ben-Hur (1925), The Phantom of the Opera (1925), Safety Last (1923), DeMille's The Godless Girl (1928), Chaplin's City Lights (1931) (re-orchestrated by Davis[8] based on Chaplin's and Padilla's[9] original written score) and Erich von Stroheim's Greed (1924), use Davis's music. Davis also created an entire re-scoring of Clarence Brown's Flesh and the Devil (1927). In many of these recordings, he is the conductor as well the composer. On several occasions he has performed these works live in the cinema, as well as in concert halls as the film is running.

Davis was born in New York City, United States, the son of Sara (née Perlmutter) and Isadore Davis.[16] Davis married the British actress Jean Boht on December 28, 1970.[1] They have two daughters, Hannah Louise (born 1972) and Jessie Jo (born 1974).[1] Davis has also composed music for daughter Hannah's films Mothers & Daughters (2004) and The Understudy (2008). Davis and his wife served as executive producers on the latter film, and they appeared in the film as a married couple, the Davidovitzes.[17]

This article uses material from the article Carl Davis from the free encyclopedia Wikipedia and it is licensed under the GNU Free Documentation License.

They Can't Take That Away From me All That Jazz & Rebecca Spiteri
Update Required To play the media you will need to either update your browser to a recent version or update your Flash plugin.