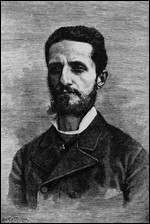 Ricordi was born in Milan, where he also died.

Ricordi was also publisher of the later operas by Giuseppe Verdi and had the good sense to promote younger composers of merit. These included Amilcare Ponchielli, Alfredo Catalani, Carlos Gomes, Umberto Giordano, and, above all, Giacomo Puccini. To the last-named, in particular, he became something of a father-figure, feared (and often needing to be censorious over Puccini's dilatory work habits) but deeply trusted.

This article uses material from the article Giulio Ricordi from the free encyclopedia Wikipedia and it is licensed under the GNU Free Documentation License.

Nightclub 1960 Agua Fresca
Update Required To play the media you will need to either update your browser to a recent version or update your Flash plugin.